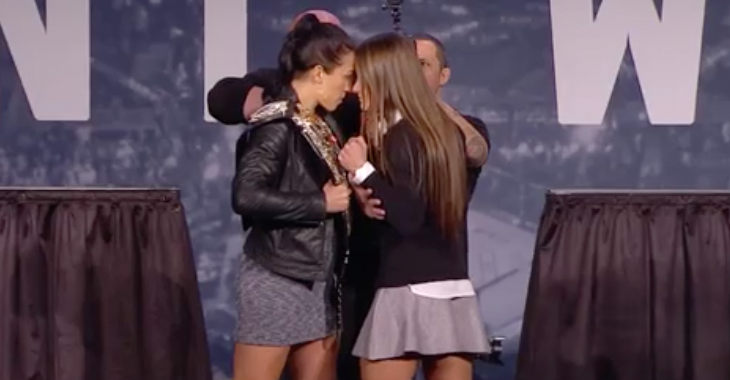 Two of Poland’s finest fighters across all divisions happen to be the former strawweight champion, Joanna Jedrzejczyk and the former challenger, Karolina Kowalkiewicz. Since they met each other in the octagon at UFC 205, they have each gone 1-1 in their two fights that followed. Ironically enough, each of their upcoming bouts take place on the same night at UFC 223 in Brooklyn, New York on April 7. For Joanna, she will be rematching the woman that dethroned her as the champion, Rose Namajunas. Since she took the first loss of her career at UFC 217, Joanna has since made it very clear that she had one of the worst weight cuts imaginable. Kowalkiewicz, however, believes that Joanna is just making nothing but excuses as she told MMANews.pl:

“For me it’s nonsense and justification of herself. I don’t know, maybe it makes her feel better about it, and she’s able to lift it somehow psychologically. In fact, every fighter cuts the weight, and it’s not pleasant for anyone. Sometimes it’s lighter, sometimes heavier, but overall it’s not a nice process. And she puts the guilt on her dietary team. Doesn’t Joanna use her own brain? If Joanna saw that she had too much weight to cut, then…

If Joanna felt that something was wrong and had too much weight to cut, then I don’t understand something. In my opinion, this is just one big fraud.”

Karolina was actually the last fighter to defeat Namajunas which is how she earned her title shot. She has already stated who she wants to win between the two combatants in the upcoming title fight, but who she would prefer to get a rematch with differs.

“My heart is more with Rose for the rematch. I just like her more as a person. I always look at who I like, who I know better, and that’s why I’m with Rose. Joanna is my compatriot, but privately she is not a nice person. In each interview, when a journalist asks her about me, she talks trash about me and offends me. So what can I say here? I won’t say that I will keep my fingers crossed for her, because I will keep these fingers crossed for Rose, who is a really honest, real person, and she doesn’t pretend to be someone else.

Recently, I talked to a friend about it, and if I were to have another chance to fight for the belt with Rose or with Joanna, I would prefer to face Joanna again. Somewhere my sports ambitions will just push me towards this fight. And if I was to face Rose, it would be a bit emotionally hard for me, because I really like this girl.”

At UFC 223, Kowalkiewicz will be taking on Felice Herrig who’s currently on a nice four-fight winning streak.