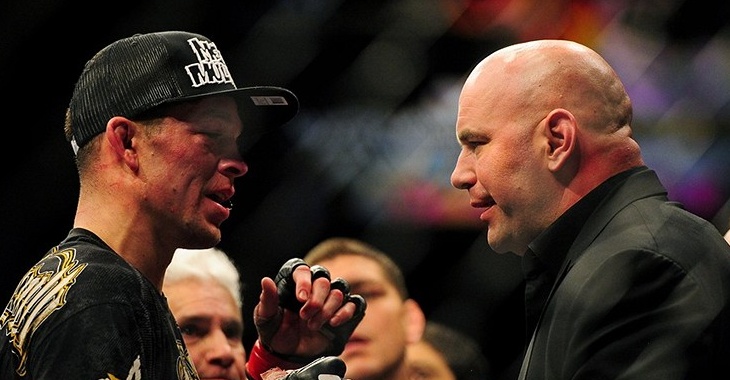 The fight was scheduled to headline UFC 222. Currently, the UFC is still looking to find a new headliner. Edgar is still wanting to stay on the card regardless of opponent and the UFC appears to be trying to set up a fight between him and Brian Ortega. Other options have included a rematch between bantamweight champion, TJ Dillashaw and Cody Garbrandt and very recently…Garbrandt vs Edgar.

According to UFC President, Dana White via The LA Times, Nate Diaz who has expressed interest is not an option as he said in a text message that White sent the rolled eyes emoji when asked about Diaz. White would then repeat a statement he gave last week saying the following:

“He [Diaz] doesn’t want to fight. We have made around five or six fights in the last six months and he has turned them all down. [Eddie] Alvarez, [Justin] Gaethje, [Edson] Barboza and [interim lightweight champion Tony] Ferguson multiple times.”

Diaz also told The LA Times that he does not consider himself a lightweight. Something that seems a little odd when one considers that he has fought practically his entire career in the 155-pound division. In fact, he’s only fought seven of his thirty fights outside of lightweight(five at welterweight, two catchweights above 155).

Multiple fighters have been open to welcoming Diaz back to the octagon for the first time since 2016. Those names include the likes of Kevin Lee, the previously mentioned former lightweight champion, Eddie Alvarez and even top featherweight contender, Cub Swanson.

What will UFC 222’s headliner end up being and who will Diaz fight if and when he returns?