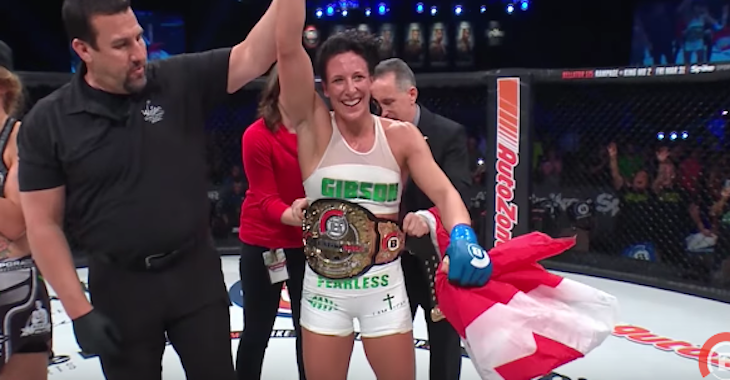 Though Coenen demonstrated plenty of heart and veteran savvy over the course of this fight, this one was really all Budd, who thumped her foe to a fourth-round TKO win. With this win, Budd returned to her native Canada with Bellator gold, and a place in the MMA history books as the promotion’s first-ever women’s featherweight queen.

Just days removed from this massive win, Budd made an appearance on BJ Penn Radio, where she discussed the fight itself and her first days as a Bellator champ with host Kinch.

“I’m really happy,” she said of her performance. “It’s been a while since I’ve been really happy with one of my fight performances. I was really proud of myself and happy to see the game plan go together so well.” While the new champ is pleased with her performance, however, that doesn’t mean she didn’t experience any surprises in the cage. Apparently, Coenen’s guard was better than she anticipated.

“I always knew that her guard was good, but I think it did surprise me just how difficult it was to get out of her guard,” Budd explained. “It felt like, in the first round, I’d pass her guard and then I’d get put right back into it. It was just surprising how good it was and it was a bit frustrating.”

Budd also admitted that she was surprised how long she had to pour on the punches before the fight was stopped by referee John McCarthy.

“I was surprised at how long it took,” she said of the eventual stoppage. “I was like ‘holy crap, this has been going on for a long time’, and she wasn’t fighting back. I didn’t want to keep going, because I didn’t want to hit her just covering up like that. I was wondering when they were going to stop it, but my cardio felt really, really, really good. That was one thing in this training camp that was awesome, we pushed it, and I felt like I could go on forever.”

Eventually, of course, the fight was stopped, which meant that Julia Budd had earned her Bellator gold. And so far, she says being the champ has been a dream come true.

What did you think of Julia Budd’s featherweight title win at Bellator 174? Sound off, PENN Nation!