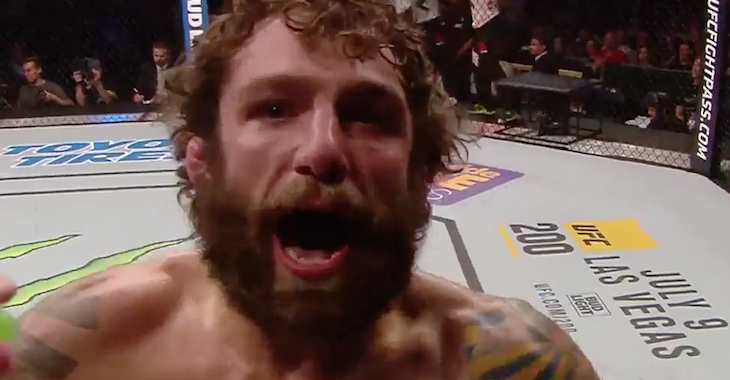 For the last few weeks, eighth-ranked UFC lightweight Michael Chiesa has been angling for a fight with former champ Eddie Alvarez. Unfortunately for Chiesa and his fans, Alvarez has been pencilled in for a bout with Dustin Poirier. The two will meet at UFC 211 on May 13 in Dallas.

On Wednesday’s edition of BJ Penn Radio, Chiesa vented his frustrations about this booking to host Kinch.

“You know honestly, I wasn’t surprised [Alvarez took the fight with Poirier],” Chiesa said. “Stylistically, that’s probably an easier fight for him, so I don’t blame him. It’s just frustrating when he goes back on a lot of the things he said. When he was on Ariel [Helwani’s] show, he talked about how fighting me is too big of a step in the backwards direction, yet now he’s fighting a guy that’s ranked lower than me. And I’m on a win-streak, I’ve won my last three, five of my last six, my last two fights I got bonuses… I mean, it’s just like, you don’t have to come out to the people and tell them you don’t want to fight me because it’s a bad matchup and you know you’re going to lose, but you don’t gotta lie to the people and be fraudulent either.”

“It’s just frustrating when his way of getting out of an explanation is just act like I’m some nobody,” Chiesa continued. “But I shouldn’t even be frustrated about it. I should be flattered that a former champ is dodging a fight with me.” The appeal of a bout with Alvarez, Chiesa added, was not that it was an easy matchup, but instead that it was a logical one.

“I didn’t look at Eddie as an easy fight, I just looked at it as a logical fight,” he said. “I’m coming off a long injury layoff, he’s coming off a loss. The last fight I was scheduled for, I was supposed to fight [Tony] Ferguson when he was ranked third in the world and Eddie is ranked third right now, so why don’t I just fight that guy? In my opinion it’s what made sense.”

Apparently, Chiesa wasn’t the only one hoping Alvarez would bite the hook either. According to the streaking lightweight the UFC was also hoping to put this fight together.

“Even the UFC was pushing for it,” he said. “I can’t have anybody go on statement and document that but they were lobbying. To my understanding, they made it clear to [Alvarez], ‘Hey, these are your options, but we’d like the Michael Chiesa fight.’ But whatever…”

Would you have preferred to see Michael Chiesa get a fight with Eddie Alvarez over Dustin Poirier? Sound off, PENN Nation!