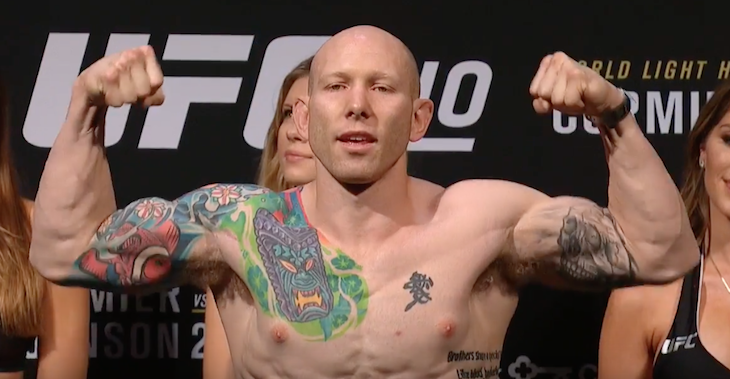 Last night, in the co-main event of UFC on Fox 26, Team Alpha Male prospect Josh Emmett stepped into the Octagon for a short notice bout with long-time featherweight contender Ricardo Lamas. Though Emmett unfortunately missed weight for this fight, he managed to make good on the opportunity in the end, knocking Lamas out with a swooping left hook in the first round.

While this win stands out as the biggest of his career thus far, Emmett said post-fight that he’d be happy to give Lamas an immediate rematch. Lamas did, after all, accept a fight with an un-ranked opponent on short notice, and didn’t back out when that opponent missed weight.

“Of course,” Emmett told MMAjunkie when asked about an immediate rematch. “He did this for me. He didn’t have to take this fight. He is one of the best guys in the world. He could have sat back and waited for the winner of (Frankie) Edgar (vs. Max) Holloway fight and then get a title shot, or fight (Brian) Ortega, and the winner of that get a title fight. I’m truly grateful for him accepting the fight, as well as with me missing the weight.”

Emmett then shared his reluctance to accept short-notice fights going forward, citing the difficulty he had not making weight.

“I’ll take four to five weeks out,” he said. “So like I said before, I apologize for not making weight. I was right on track, and just with the timeframe I had left, I knew there was no possible way that I could make (weight) within that time. I just stopped sweating.

“I didn’t have enough time to water load. I just messed up, but I take credit for it, and it won’t happen again.”

Where do you think Josh Emmett goes from here? Do you think Ricardo Lamas deserves a rematch?