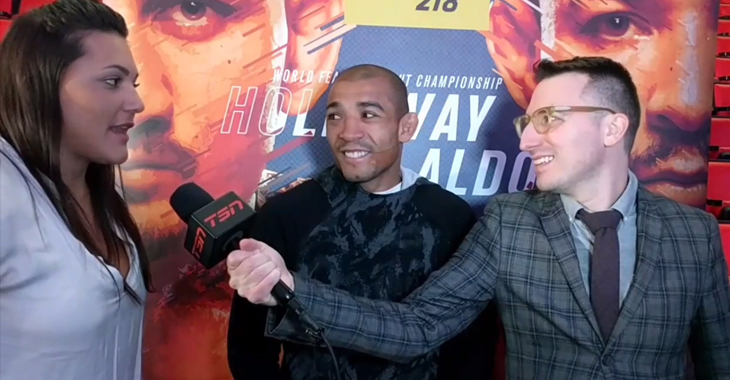 Weigh-ins are always a tough time for anyone, but especially for championship bouts. So many fights have been ruined by a bad weight cut. Last night’s main event for The Ultimate Fighter finale was even switched up due to kidney failure. Both Max Holloway and Jose Aldo appeared to be going through tough cuts and they each had their own mishaps. Holloway got his manhood exposed by a helpful Justin Gaethje, while Aldo missed weight on his first attempt and seemed to be drained and exhausted. When asked about his trouble cutting weight, Aldo delivered one of the most amazing lines in MMA history to Aaron Bronsteter of TSN.

Aaron Bronsteter: You got on the scale today at 146, then you had to take off the shorts and you made weight at 145. Did you have any questions about whether or not you’d make weight?

Jose Aldo’s translator: I knew I was on the right weight, but I like to play dead just to f-ck the gravedigger’s ass.

Bronsteter: Okay, I’m trying to figure out what that means. Can you elaborate on that?

Translator: He likes to pretend he’s dead, just to f-ck the gravedigger straight up in the ass. That’s what he said, yeah.

Bronsteter: …Alright, I’m not sure we can air that but we’ll do what we can. We’re not sure this is a Brazilian phrase lost in translation, or just something wild Jose Aldo decided to throw out there to have a little fun, but the reaction of the parties involved is hilarious. Jose Aldo grinning like a kid with a secret while watching his English translator decide if she can truly say what he wanted her to translate was a treat. The consummate professional, Aaron Bronsteter had no idea what to make of it in the moment.

Whether it was to tempt fate or to play mind games with his opponent and the media, Jose Aldo put on a show at the weigh-ins. A more common phrase would be that he was playing possum, which may sound as wild as Aldo’s anecdote if it was translated to Portuguese. No matter if he was lying or not about how bad the weight cut was, at least we got this crazy phrase to add into MMA culture.