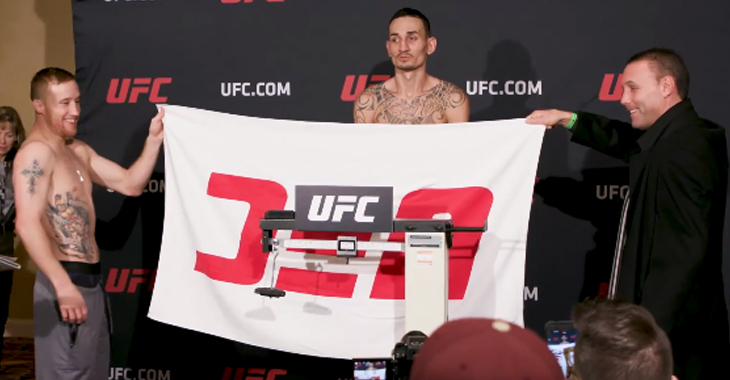 Weigh-ins are always tense, especially when a fighter needs to bring the towel out. So many fights have been called off or changed to catchweights because of the scale. Even tonight’s main event was completely changed due to Sijara Eubanks not even weighing in due to her kidney failure. Both Max Holloway and Jose Aldo needed the towel at the scales but Holloway is the one who stole the show with a little “help” from lightweight Justin Gaethje.

MMA, you gotta love it. pic.twitter.com/zr5ZUBf2q8

When Max Holloway had to disrobe, Justin Gaethje swooped in for the honor of holding the towel in front of him to cover him but didn’t do that good of a job. They try to straighten out the towel and get it on the other side of the scale, flinging it up into the air revealing all of Max Holloway to the officials and the media at the early weigh-ins. Luckily, the folks at MMA Fighting were able to blur out Holloway’s undercarriage like a criminal from a COPS episode. Max Holloway’s expression never changed, but some nervous laughter broke out and Gaethje cracked a smile. Other than Jose Aldo having to weigh in twice and both fighters looking drawn out, there were no other hiccups and all fighters made weight.