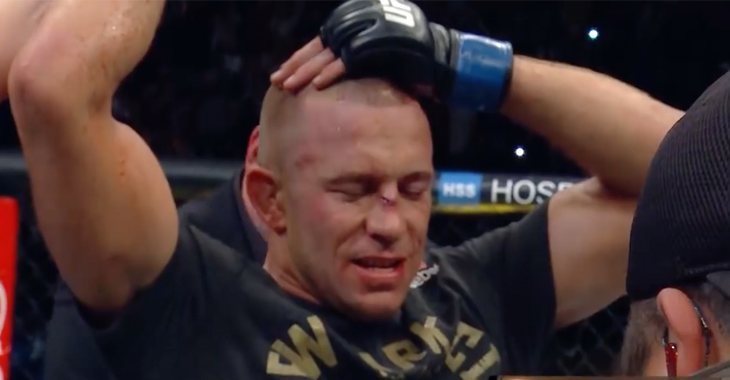 At UFC 217. Georges St-Pierre swooped back into the UFC and did the unthinkable. Moving up in weight in his first fight in four years, he fought Michael Bisping and choked him out to become the UFC middleweight champion. Other than Dana White and St-Pierre repeatedly saying that he is “contractually obligated” to defend against Robert Whittaker next, his future has been up in the air and there have been rumblings about a move back to welterweight. However, it looks like St-Pierre won’t be fighting in any of those divisions anytime soon. Dana White announced that he has ulcerative colitis.

Dana White says UFC middleweight champion Georges St-Pierre is going to be “out for a minute,” as he’s dealing with colitis. That sounds unpleasant. https://t.co/w1umXJ9DX7

“In order to move up to middleweight, Mr. St-Pierre took on a nutritional program designed to facilitate weight gain and hold weight during the rigors of a full fight camp. The result was a disaster. Two weeks into camp he developed severe stomach pains and vomiting. Initially it was suspected that he had an illness, but all tests came back negative. “The situation deteriorated to the point that for two weeks of a six week camp there was no training at all. At a critical point we gave him a two day window to either get back in the gym or call off the fight.” — via John Danaher’s official Instagram.

According to WebMD, ulcerative colitis is a disease that causes inflammation and ulcers in the lining of the large intestine and it doesn’t sound fun at all. While we are not doctors, this ailment could have stemmed from his struggle to move up in weight. After the fight with Michael Bisping, John Danaher released a lengthy statement that detailed the entire preparation and how much St-Pierre struggled with abdominal pain and vomiting. St-Pierre even revealed to Ariel Helwani that he has been intermittently fasting since UFC 217. This could be a sign that when Geroges St-Pierre does indeed come back, that it won’t be in the middleweight division.