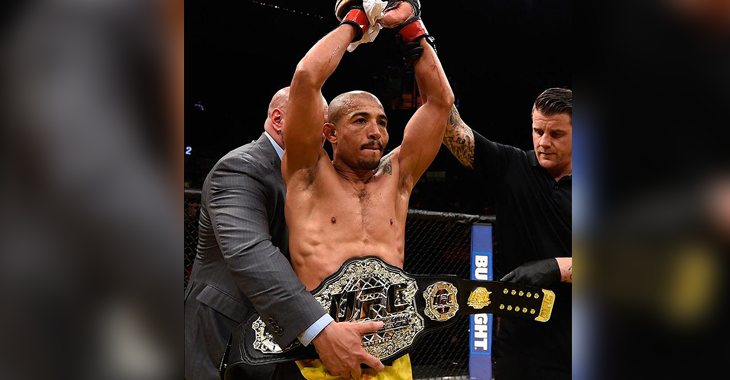 Jose Aldo is once again the undisputed UFC featherweight champion.

This all comes after the UFC announced that Conor McGregor “relinquished” his featherweight title shortly after winning the lightweight title against Eddie Alvarez at UFC 205, making him the first concurrent two-division UFC champion is the history of the sport.

UFC President Dana White stated multiple times prior to UFC 205 that Conor McGregor would have to decide which division’s title he would give up if he ended up winning the lightweight title from Alvarez, which “The Notorious” did in a brilliant performance.

Aldo spoke with SporTV channel’s Planeta (transcribed by MMA Junkie) after being promoted from the UFC interim featherweight champion to the undisputed champion of th 145-pound division.

“It was a fact that this was going to happen. We knew (McGregor) was going to relinquish the belt – obviously, either mine or the lightweight one,” Aldo said.

“I think both are very tough fights for him, either at lightweight with Khabib (Nurmagomedov) or a rematch with me. So he chose to let go of mine. It’s no problem. Of course, first I want to do a (title) defense and then, yes, I will want to pursue a fight with (McGregor).” Aldo added that he will get his rematch with “The Notorious” at some point in the future.

“Since Dana said that we can choose who we want to fight, I want to fight (McGregor). “That’s what’s going to happen.”

Even with not getting his rematch with his Irish rival just yet, Aldo says he is happy with getting his championship status back.

“I think I’ve always been the champion, and I will always be the champion,” Aldo stated. “As long as I’m at featherweight, no matter what happens, I’ll keep being the champion. So this, for me, was something that was already certain. The minute I lost, I knew, the next day, the belt would be mine again. It was just a matter of time. Of course, (it was) not the way I wanted, but I’m happy because I know I’m the champion.”