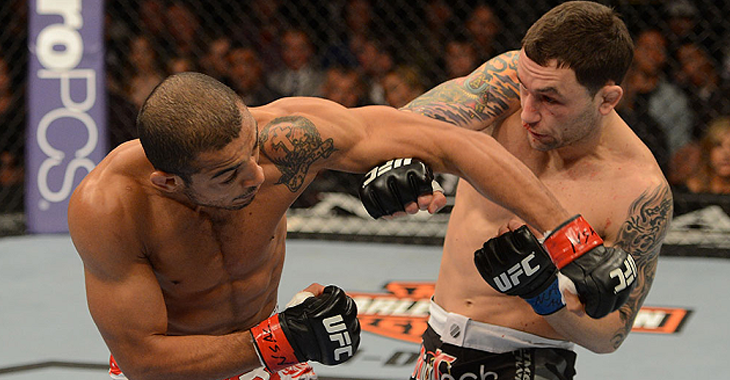 Jose Aldo and Frankie Edgar are both gunning to get the UFC featherweight title and will get their chance to get the interim belt at UFC 200.

This will be a rematch for the two former champions, first meeting at UFC 156 back in 2013. Aldo won a unanimous decision, but Edgar says many others saw the fight in his favor.

“Are you kidding me? Are you kidding me? No way,” Aldo said to the media in Rio de Janeiro regarding some thinking Edgar won the first match (transcribed by MMA Fighting). “I haven’t watched it anymore because I know I easily won that. I won that only with my left arm. I don’t know where he saw that. You can say he won the fifth round and that’s it, but I won the other four. I won, no doubt.”

Aldo also said that he respects Edgar but doesn’t feel like he has made any vast improvements since his move down from the lightweight division to featherweight division.

“I don’t see evolution in him. He has adapted to the division, but I don’t see an evolution,” Aldo said. “He continues doing the same game, same movement. I respect him, but I’m capable of getting there and winning.”

If Aldo was, in fact, able to pull off the victory over the former lightweight champion with mainly his left arm, Edgar could be in for a rough night at UFC 200.

What are your thoughts on the featherweight interim championship fight? Leave your prediction in the comment section on how you think the fight will go.