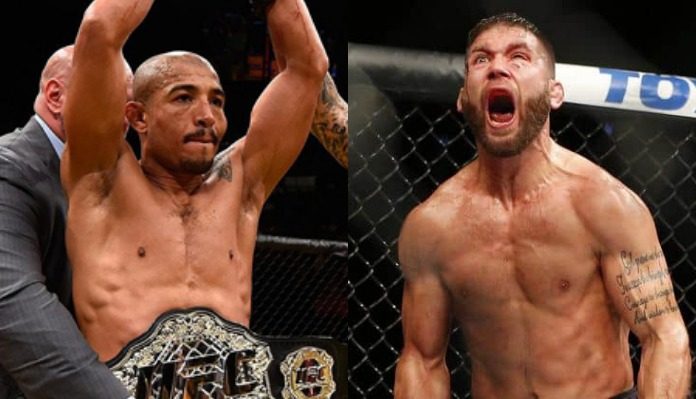 Though it was briefly linked to the UFC’s upcoming return to Singapore, Jose Aldo and Jeremy Stephens’s compelling featherweight showdown will instead serve as the co-main event of the UFC’s anticipated return to Calgary, Alberta, Canada. This return to Calgary goes down on July 22.

This news was first reported by Combate, and has now been confirmed the Calgary Sun.

Jose Aldo, who is widely considered the best featherweight in MMA history, has lost his last two fights, both by third-round TKO opposite reigning champ Max Holloway. Prior to these losses, he defeated Frankie Edgar by decision. This win over Edgar was preceded by a 13-second knockout loss at the hands of Conor McGregor. Other highlights of Aldo’s legendary career include defeats of Chad Mendes (twice), Ricardo Lamas, “The Korean Zombie” Chan Sung Jung, Kenny Florian, Mark Hominick, Urijah Faber, Mike Brown, and Cub Swanson. He’s 26-4 overall.

Stephens, on the other hand, is on an impressive three-fight streak. This streak began with a decision defeat of former Strikeforce lightweight champion Gilbert Melendez. In his next fight, he scored a knockout defeat of fellow striking specialist Doo Ho Choi. His most recent fight, finally, occurred in February, when he scored an impressive—if slightly controversial—knockout win over Team Alpha Male’s Josh Emmett. His overall record currently sits at 28-14.

At present, the main event for this Calgary card, which will air on FOX, has not yet been determined. Here’s the fight card as it stands (via Calgary Sun).

Who do you think comes out on top in UFC Calgary’s Jose Aldo vs. Jeremy Stephens co-main event?