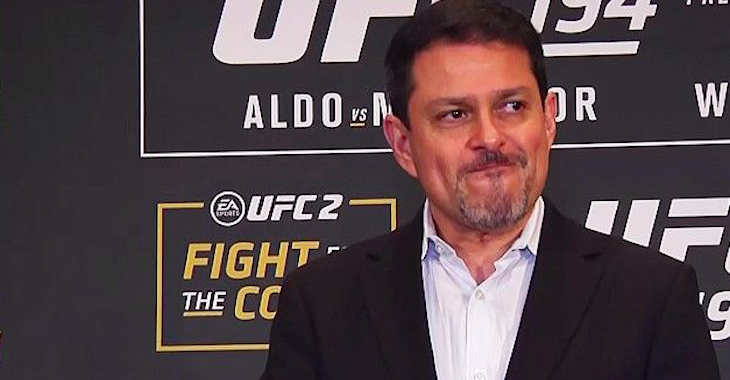 On the latest edition of the MMA Hour, former UFC heavyweight Matt Mitrione claimed that former UFC matchmaker Joe Silva lied to him about the size of the Octagon ahead of his 2012 bout with Roy Nelson, claiming the large cage would be used, when the small cage was used instead.

“Anyone who’s ever [seen] me fight or [listened to] my interviews, knows how much I despise that small cage, and Joe Silva lied to me and told me it’s the big cage so I would take the fight,” Mitrione said (h/t BloodyElbow). “The reason why I don’t like it is because it eliminates all my mobility, it eliminates my evasive action and my offensive footwork.”

“One hundred percent, (he lied). Because they know I won’t take a fight in that small cage. That’s one of the reasons why, I would always tell them, ‘what cage is it in?’, ‘we don’t know what it is yet.’ How can you tell me that’s something you don’t know, when I’m the most mobile heavyweight, and I’m actively saying I don’t want to fight in the small cage? ‘We don’t know what it is until we figure out the venue. We just know the date.’ That’s some bullsh—t man.”

“That’s the reason why I kicked him — if you go back and watch the film, I kicked Joe Silva in the stomach right after the fight. I literally threw a bodykick and kicked him in the stomach. He’s like ‘Matt I had gall bladder surgery,’ you shouldn’t have lied to me then.”

Now, it appears that Mitrione isn’t the only fighter to have gripes with Joe Silva. On Monday night, UFC lightweight Chris Wade took to Twitter to echo Mitrione’s dislike for Silva, claiming that Silva threatened to cut him for turning down a fight with an opponent who’d recently had a brush with USADA.

Mitrione with Silva lying. I was 4-0 lost my first fight to Khabilov almost scored knockout didn’t happen. I tried to turn down a fight with someone coming off PED suspension appeal he says he’ll cut me that I’m in no pos to turn down a fight. I’ll slap that Napoleon fuck

“Mitrione with [Joe] Silva lying…” Wade said. “I was 4-0, lost my first fight to Khabilov almost scored knockout didn’t happen. I tried to turn down a fight with someone coming off PED suspension appeal, he says he’ll cut me, [knowing] that I’m in no [position] to turn down a fight. I’ll slap that Napoleon fuck.”

What do you make of these claims against former UFC matchmaker Joe Silva?