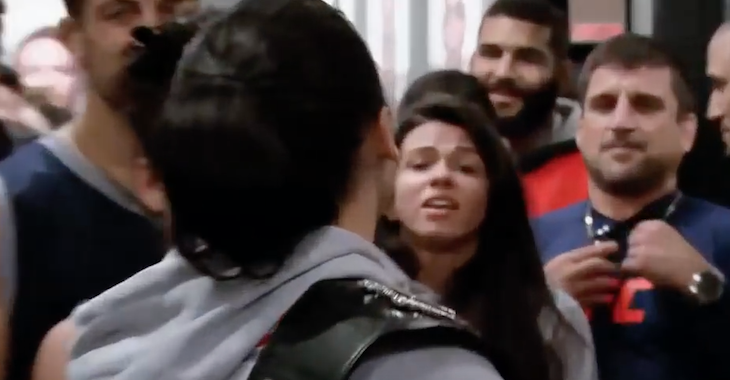 Many fans quickly began to turn on UFC women’s strawweight champion Joanna Jedrzejczyk when season 23 of The Ultimate Fighter began airing. Jedrzejczyk was portrayed in a rather negative way, as footage of her provoking Claudia Gadelha and her coaches with trash talk began to air.

Jedrzejczyk has remained quiet on the situation, however in a recent interview with SiriusXM Fight Club she explained that she isn’t watching the show.

“I heard every day that I’m a very good coach, that I’m a very good partner for my teammates and for my fighters but they show on TV that I’m a bad person but I’m not. So that’s why I’m not watching this. I’m focused on my preparations for my upcoming fight with Claudia Gadhela and I just want to make sure that I’m gonna be at 100 percent and you’re gonna hear ‘and still’ on July 8th.

“The second episode or the third [episode] I saw that I was jumping to one of Claudia’s coaches but the story was different. They started the fight. I’m the champ. I became the champion a long time ago. You know I’ve been working so hard for my title and I cannot let Claudia or someone from her team jump to me. You know what I mean. They cannot push me, they cannot yell at me. I’m kind of tough girl and they cannot just play with me. When you’re nice to me, I’m nice to you; but when you are not nice, I’m even worse.

“People just see tense situations in the TUF program. They can see that I am bully but it wasn’t like that. Don’t trust everything you see on TV.”