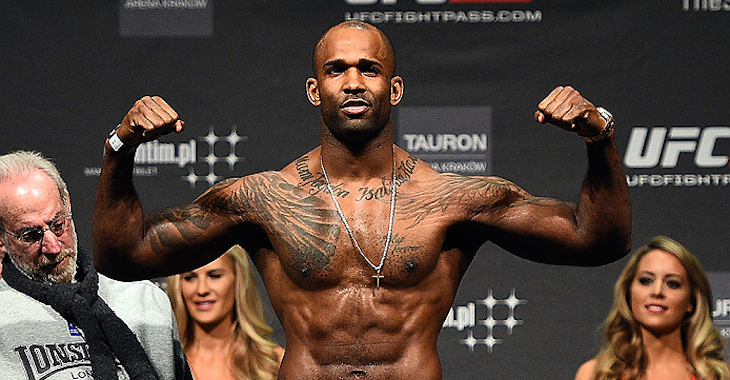 Last weekend, in the main event of the UFC’s latest trip to London, England, the UK’s own Jimi Manuwa scored a crushing, first-round knockout of the game Corey Anderson. With this win, which followed a similarly impressive knockout of Ovince St. Preux, Manuwa reaffirmed his status as one of the best light heavyweights on earth, and one of the top contenders in the division.

With this latest win, there are many interesting options available for Manuwa’s next fight. Apparently, however, there are only four opponents he’s willing to accept at this point: light heavyweight champion Daniel Cormier, upcoming title challenger Anthony “Rumble” Johnson, former champion Jon Jones, or boxer David Haye.

Manuwa explained his desire for one of these four fighters on the latest edition of The MMA Hour.

“My next fight should be either Daniel Cormier, Anthony “Rumble” Johnson, Jon Jones, or David Haye,” he told host Ariel Helwani. “Those are the four people on my list, and out of them four I don’t mind who I fight.”

Manuwa then elaborated on why he’s hesitant to except fights with other ranked light heavyweights. Apparently, it’s because many of them have recently declined the opportunity to fight him.

“I’m not really interested in fighting anyone else,” he said. “After my last fight with [Ovince St. Preux], I wanted to fight someone ranked above me, as in [Glover] Teixeira or Ryan Bader, or even maybe one person behind me was [Mauricio “Shogun” Rua]. We were scheduled to fight a couple of years ago, but I got injured. That would have been a fun fight, but then Teixeira turned me down, Bader turned me down, Shogun said no… These people, it seems like they’re running or hiding or avoiding. I don’t know what they’re doing. I don’t see why they wouldn’t want to fight the best and solidify their position and fight the best people. Teixeira ended up fighting Jarred Cannonier. I’m not taking nothing away from him, but he’s not even ranked in the top-10 or top-15, you know? That fight made no sense to me. Bader has gone to Bellator now, and Shogun fought Gian Villante. I don’t know where he’s ranked. These people are not trying to further their career or nothing, they’re not trying to get the belt. I’m trying to get the belt. That’s what’s on my agenda. I’m looking to go forward.”

Who would you like to see Jimi Manuwa fight next? Sound off, PENN Nation!