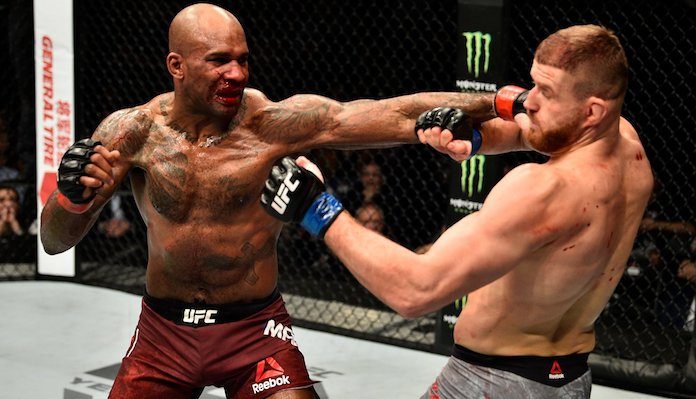 Jimi Manuwa is happy that the UFC’s light heavyweight division has “come alive” in recent months.

Manuwa has been in the UFC since 2012, where he saw Jon Jones become the promotions light heavyweight champion and defend his belt several times. Jimi believes the division was stagnant when “Bones” first dealt with his USADA and personal issues.

Now, however, the Englishman sees the light heavyweight division as one of the more exciting divisions in the UFC.

“I think the division has come alive in the last year. For a couple of years, it was a bit stale when ‘DC’ was the champ. Now that Jones has come back and became champ he has been giving all these newcomers a shot,” Manuwa said to BJPENN.com. “I think it is alive with Reyes and all these new contenders. The division is alive now.”

The big question mark of the light heavyweight division is who will fight Jon Jones next. Many think it should be Dominick Reyes, yet Manuwa doesn’t think so as he says Bones clearly won that scrap.

“I thought Jon Jones won the fight. Jones has been the champion for 10 years and you can’t try and claim the belt that way,” he explained. “You have to be decisive and Reyes didn’t do enough in the rounds to win. I think it was 2-2 into the fifth and Jones won that round showing his championship pedigree.”

Given Jimi Manuwa doesn’t think Dominick Reyes beat Jon Jones, he says Jan Blachowicz should get the next title shot. But, he says the most interesting fight would be Jones vs. Thiago Santos 2.

“I think I would give Blachowicz a shot but none of these fighters have set it on fire. Blachowicz had a nice knockout over Anderson which is the only reason why I’d give it to him,” he said. “Reyes had a close and great fight against Jones but it wasn’t something that I wanted to see run back. Santos is the most exciting fighter in the division, so maybe Santos gets it when he returns?”

What do you make of Jimi Manuwa’s thoughts on the light heavyweight division?