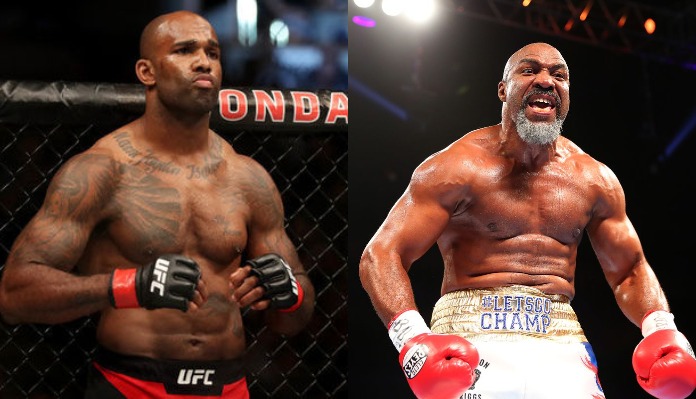 Jimi Manuwa is still interested in becoming a professional boxer.

The former UFC light heavyweight retired last summer but recently said he is interested in a return to the Octagon. But, if that does not happen, the Englishman says he would like to box.

“I have heavy hands and I always loved boxing. These last few months I’ve been focusing on my boxing,” Manuwa said to BJPENN.com. “Like maybe someone like Shannon Briggs would sell out arenas anywhere in the world. That is something I am really thinking about and leaning towards.”

Briggs, of course, is a former WBO heavyweight champion where he has notable wins over Georges Foreman, Ray Mercer, and Siarhei Liakhovich. He has also fought the likes of Lennox Lewis and Vitali Klitschko. The 48-year-old last fought in May of 2016.

Yet, “The Cannon,” told Sky Sports in early 2019 that he would be applying for a UK boxing license to be able to box in England. He also was the head trainer of YouTuber Logan Paul for his bout against KSI, showing he is still involved in boxing.

So, with Briggs still open to the idea of boxing, and wanting to box in England, Jimi Manuwa says it makes sense for the fight to happen. He also knows it would sell out any arena in England.

“I don’t want to come in and start at the bottom and fight these lower-level guys for years. I’m about the big fights and giving exciting fights for the fans as my resume speaks. I had David Haye in mind a couple of years ago but I saw him at Bellator and I asked him to fight and sell out the arenas but he wasn’t up for it,” Manuwa explained. “He said he is retired, so you have to respect that. There are so many big names but maybe coming to the end of their careers which would make for a great fight. Shannon Briggs is someone I’d want to fight.”

Whether or not Manuwa will go into boxing is to be seen. And, whether or not Briggs will even want to fight Manuwa is also unknown. But, it would no doubt a very interesting fight.

Would you be interested in seeing Jimi Manuwa box Shannon Briggs?