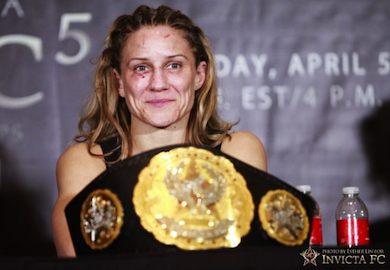 “We are excited about returning to the big stage in full force with another loaded card featuring a fantastic mix of world championship bouts and other world-class MMA action that will see a collection of the best women fighters on the planet face off against each other,” said Invicta FC President Shannon Knapp.

Smith, a 31-year-old striking aficionado, has become a memorable face by engaging in all-out slugfests with her opponents on the five Invicta FC cards that she has appeared on. On July 13, Smith, in her firsts start at flyweight after a healthy run at bantamweight, outgunned Jennifer Maia to earn a unanimous decision after three rounds of action.

The 26-year-old Esparza, a student of famed trainer Colin Oyama, will step in the cage for the first time since sustaining a knee injury in training earlier this year. In her last effort at Invicta FC 4 on January 5, she notched her fourth consecutive win, a unanimous decision over “Rowdy” Bec Hyatt.

Gadelha has been unstoppable with her submission game and, lately, her striking, since turning pro in 2008. The 24-year-old will make her second start under the Invicta FC banner after scoring a third round (3:58) TKO on JEWELS champion Ayaka Hamasaki with a barrage of punches on July 13.

Murphy has been perfect, thus far, in the Invicta FC cage, earning back-to-back unanimous decision victories over Kaitlin Young and Sarah “The Monster” D’Alelio on April 5 and July 13, respectively. Prior to her Invicta FC debut, the 30-year-old had scored TKO finishes on all five her career opponents.

The 37-year-old Nakamoto, a seasoned Muay Thai champion extended her unblemished record at Invicta FC 6, scoring a thunderous first round (2:08) TKO on Duda Yankovich with a knee strike and series of punches. The finish earned Nakamoto “KO of the Night” honors.

In other main card action, Felice “Lil’ Bulldog” Herrig (9-4) of Buffalo Grove, Illin. will make her highly-anticipated Invicta FC debut and put a four-fight win streak on the line in a strawweight matchup opposite unbeaten, fast-rising star Tecia “The Tiny Tornado” Torres (3-0) of Fort Lauderdale, Fla.

Porto (15-6) of Sao Paulo, Brazil will look to rebound from a defeat the hands of Honchak at the last Invicta FC event in July when she collides with fellow superstar Zoila Frausto Gurgel (12-3) of Cincinnati, Ohio at flyweight. Porto has claimed 10 of her 15 professional career victories by way of submission while Gurgel has defeated a host of top rivals, including Jessica Aguilar and Megumi Fujii during her outstanding four plus year professional career.

In another meeting between two Invicta FC newcomers, hard-punching Munah “The Perfect Storm” Holland (5-2) of Elmwood Park, N.J. will face streaking Nina “The Strina” Ansaroff (5-4) of Fort Lauderdale at flyweight.