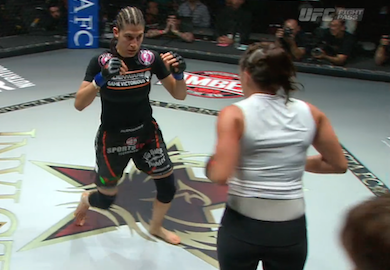 Roxanne Modafferi used “The Force” to get back to her winning ways tonight! This was her first victory since May 2010.

Contrary to popular belief, neither woman tried to take the fight to the ground as it stayed standing the full fifteen minutes. LaRosa was animated throughout the fight, making faces at Modafferi whenever she landed or got popped with a jab. Modafferi stayed serious and her approach in striking was beautiful.

Modafferi picked her shots and attacked from different angles. LaRosa absorbed shots to the face, body and a slew of leg kicks. Modafferi was also very active on her feet, resetting her stance to the middle of the cage often to pull away any momentum LaRosa was gaining.

LaRosa looked decent in the first round, but her gas tank started to drain in the middle of the second and she payed for it big time at the start of the third. She hung her hands low due to her sapped energy and got dropped by a big right hand from Modafferi. Modafferi invited her get back to her feet and they had a nice kickboxing bout until the final horn sounded.

Modafferi wanted the win more and it showed that she trained hard for tonight’s fight.