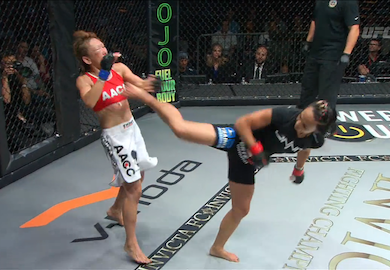 Some questioned whether the eighteen month layoff would effect Michelle Waterson’s performance in the cage. She would go on to lay those questions to rest by giving Yasuko Tamada the worst beating of her life tonight at “Invicta FC 8”.

“The Karate Hottie” successfully defended her Invicta FC Atomweight Championship and proved that she did not lose a step while sitting on the sidelines. Yasuko Tamada and her grappling skills proved to be no challenge for Waterson as the only time the fight went to the mat was when Tamada was knocked down.

Waterson put on a striking clinic and put on a fantastic performance, changing levels and attacking from different angles. She kept Tamada guessing what part of the body she was going to attack next and where. Whenever Tamada would go in for the clinch to initiate a takedown, Waterson was quick to defend with brutal Muai-Thai knees and continued to land until Tamada separated.

Tamada’s body decided it had taken enough punishment in the third round after Waterson landed a devastating knee to her forehead. Tamada ate the knee and went limp, bouncing onto the cage’s fencing. If it weren’t for the wall, she would have toppled over onto the mat. Waterson went in for the kill and landed a big right hand to the jaw of Tamada.

The referee stepped in and waved the fight off, giving Waterson her first successful defense of the Invicta FC Atomweight Championship.

Michelle Waterson de.f Yasuko Tamada by way of TKO (Strikes) 4:58 of Round 3