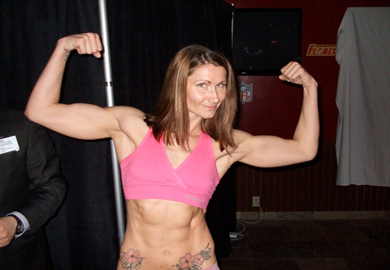 Additionally, Norma Center (2-0) of Albuquerque, N.M. will square off in a strawweight (115 pounds) contest with fellow undefeated rising star Joanne Calderwood (6-0) of Glasgow, Scotland after Calderwood’s original opponent, Sarah “White Tiger” Schneider of Raytown, Mo., was forced to withdraw from the bout due to a leg injury.

The 6-foot, 36-year-old Tweet is a winner of three straight fights, including her last start on June 1 when she submitted Amanda Bell in the first round (4:18) of their meeting with a rear-naked choke.

The 5-foot-6, 32-year-old Gomes, meanwhile, will enter the cage on a four-fight winning streak. Her last two victories – a first round (4:19) submission (rear-naked choke) of Katalina Malungahu and a unanimous decision over JEWELS star Hiroko Yamanaka occurred at Invicta FC 3 and Invicta FC 4, respectively.

Center is a 25-year-old protégé of master trainer Greg Jackson. She made her pro debut on March 23, earning a unanimous decision over Rachael Cummins, after amassing a perfect 4-0 record as an amateur.

The 26-year-old Calderwood is a ferocious striker who has notched four of her six career victories by way of (T)KO. In her Invicta FC debut last October 6, Calderwood decimated Ashley Cummins with a

Tickets for Invicta FC 6, priced from $35, are on sale online at TicketFly.com.

In the strawweight co-main event, a pair of undefeated stars in JEWELS champion Ayaka Hamasaki (9-0) of Tokyo, Japan and Claudia Gadelha (9-0) of Mossoro, Rio Grande Do Norte Brazil will put their untarnished records on the line against each other.

The live Pay-Per-View telecast of the nine-bout Invicta FC main card will begin at 9:00 p.m. ET/6:00 p.m. PT on both cable and satellite pay-per-view via iN Demand, DISH, Avail-TVN in the United States and Bell TV in Canada, for a suggested retail price of only $14.95.

Invicta FC 6 will also stream live in its entirety, including the four-bout preliminary card, beginning at 7:00 p.m. ET/4:00 p.m. PT.