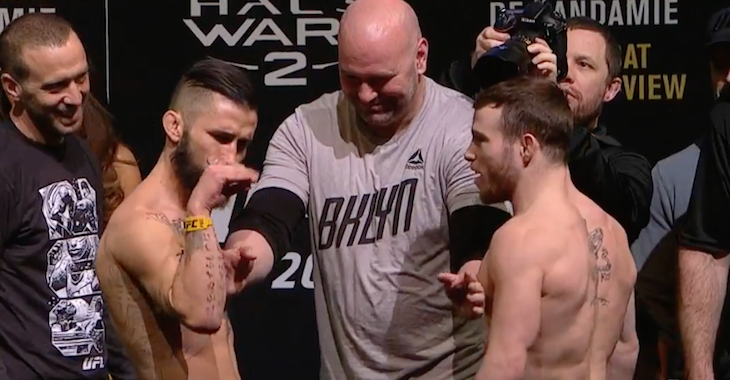 This led to numerous reports surfacing that McCall had been pulled from the event due to being hospitalized, marking the fifth time in a row that the popular flyweight had a fight cancelled. With that being said, there had been no official word from the UFC on Ian McCall pulled from the scrap until now.

The UFC released a statement through UFC.com:

Flyweight contender Ian McCall has been removed from tonight’s UFC 208 bout against Jarred Brooks due to illness.

McCall was transported to a local hospital with gastrointestinal issues and was pulled from the card on the doctor’s recommendation.

The UFC 208 card at Barclays Center will proceed as scheduled with 10 bouts.

McCall would have been looking to rebound from a 2015 unanimous decision loss to John Lineker at UFC 183, which snapped a 2-fight win streak that saw McCall bounce back from back to back losses, including a 2012 loss to Demetrious Johnson in the flyweight tournament semifinals. We would like to wish Ian McCall a speedy recovery, and hope he is able to return to the Octagon soon!