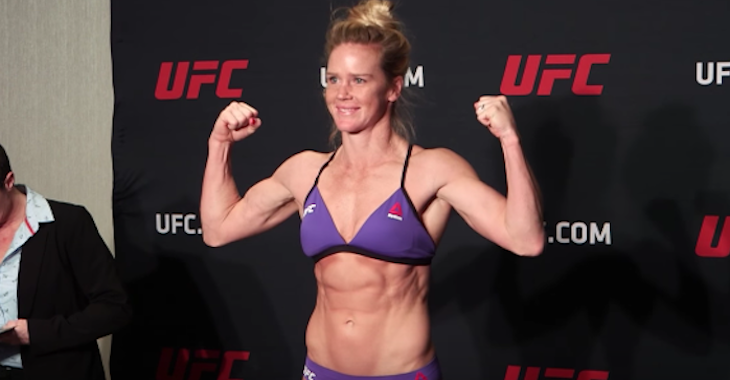 Tomorrow night, the UFC will return to our screens with UFC 208.

This card, which will emanate from beautiful Brooklyn, New York, will be headlined by a bit of history, as former bantamweight champion Holly Holm and kickboxing veteran Germaine de Randamie battle to become the UFC’s first ever women’s featherweight champion.

The co-main event, meanwhile, will pit struggling middleweight great Anderson Silva against the division’s eighth-ranked fighter, Derek Brunson, while the rest of the main card will be filled by a middleweight bout between Ronaldo “Jacare” Souza and Tim Boetsch, a light heavyweight battle between Glover Teixeira and Jared Cannonier, and a lightweight bout between Dustin Poirier and Jim Miller. The undercard, finally, will feature compelling scraps in the featherweight, welterweight and and lightweight divisions.

This morning, the fighters on this anticipated card took to the scale to weigh in for their prospective battles.

The most important result of this early weigh-in, of course, is that Holm and de Randamie both made weight, meaning that their inaugural women’s featherweight title fight is a go. Outside of Holm and De Randamie, all fighters that hit the scales made their contracted weights. There was, however, one hiccup as a heavyweight fighter Justin Willis – who stepped in against Marcin Tybura on short notice – was deemed medically unfit to fight by the commission. As a result, his bout with Tybura has been removed from the card altogether. Tybura will receive his fight purse despite this cancellation. See a full rundown of the UFC 208 weigh in results below:

Which fight on the UFC 208 bill are you most excited for? Sound off, PENN Nation!