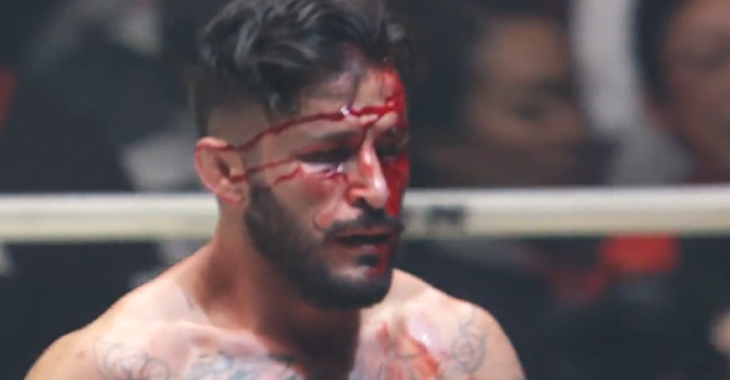 After a string of some of the worst luck the MMA world has ever seen, Ian McCall is out of the UFC and healthier than ever. In his first fight since January, he was set to enter into Japan’s RIZIN ring to fight smart-mouthed prospect Manel Kape. The two nearly came to blows in their first staredown, then actually threw strikes at each other at the weigh-ins. So when the time actually came to fight, the air was electric and people were not disappointed. That is, until the fight ended. Not because Ian McCall was actually beat by Kape, but because of a cut caused by ring ropes.

Ian Mccall losing via TKO (Rope Cut) stoppage has to be a first. #RIZINFF pic.twitter.com/eewlAgjG3r

The action was crazy in the first couple of minutes of the first round. Some wild exchanges went flying until Ian McCall decided to take Manel Kape down. Kape backed up to avoid it and in the process got pinned into the turnbuckle. Somehow, McCall raked his forehead across the ropes and it ripped him open. He was then put in a guillotine by Kape, but seemed to not be in any danger sitting in it and letting his opponent tire his arms out. Suddenly, the fight was paused for the doctors to look at his cut.

Just like that, the fight was called off and McCall’s RIZIN debut was over not even halfway through the first round. Uncle Creepy hasn’t made a statement yet about the controversial decision, but needless to stay he probably wasn’t happy. Hopefully RIZIN gives McCall another shot or perhaps a rematch with Manel Kape. There’s certainly enough legitimate heat between the two to warrant another go around. The abrupt end to the fire fight last night only adds more on top of that. Either way, we hope to see McCall back because he looked great.

Well I’m officially the unluckiest person the sport of mma ever … cut from Fucking a ring rope. Not the loud mouth cunt I was about to smash.