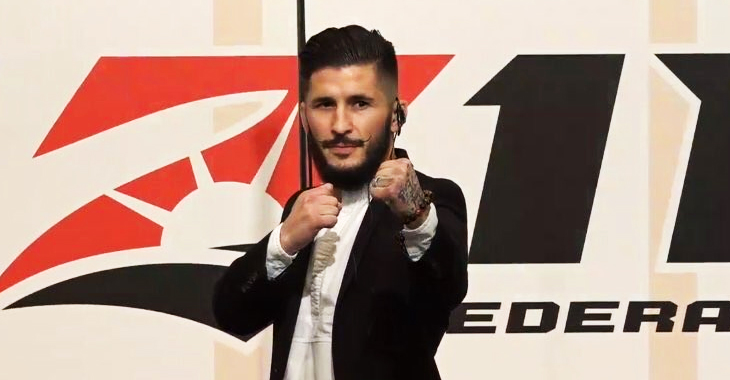 Former UFC flyweight title contender Ian McCall didn’t take long to jump ship to RIZIN. It was so quick, it was like a he grabbed his suitcase, walked to a dock, and got on a ship like in Mortal Kombat. He had made up his mind he was going to respectfully confront Kyoji Horiguchi, eyeing to fight him in the final of the RIZIN bantamweight grand prix. Of course, he’d have to get through Manel Kape first. His wild man opponent proved he’s willing to say whatever it takes to get under McCall’s skin, but Kape needs to be careful what he wishes for.

Hahahah keep wishing u fucking retard, Sort out your phycological problems you mental fuck. I’ll finish you in one round

“If you’re going to talk sh-t to me, at least make it in English so I can understand. Next time, at least try and kiss me or something, because that was weird and awkward. Even if you did knock me out, there’s no way you’d be able to f-ck my girlfriend. She’s really hot, and you’re a slob. So you need to f-cking relax.” “I understand you’re 7-1, but let’s focus back on the fact that I think all but two or three guys have losing records, and even guys who have winning records are like 10-9 or 7-5. They’re dog sh-t. I can’t wait to teach this kid a lesson. I can stomp on his head; I can do some really f-cked up sh-t to him. It’s going to be really fun.” — Ian McCall speaking to MMA Junkie.

1. It’s not nice to call anyone a fucking retard.
2. Learn to count, you’re holding up 4 fingers as you claim you’ll beat me in 3 mins. pic.twitter.com/1kyF2DckyY

That’s some serious talk from both guys not for faint of heart or easily offended. We’ll have to wait patiently to see who’s bark is worse than their bite. Clear your schedule and drink some coffee for December 29th, you’re not going to want to miss potential head stomping by Ian McCall and Manel Kape at RIZIN’s ongoing tournament. McCall has the potential to become a champion and Kape will look to use his name to become a name himself.