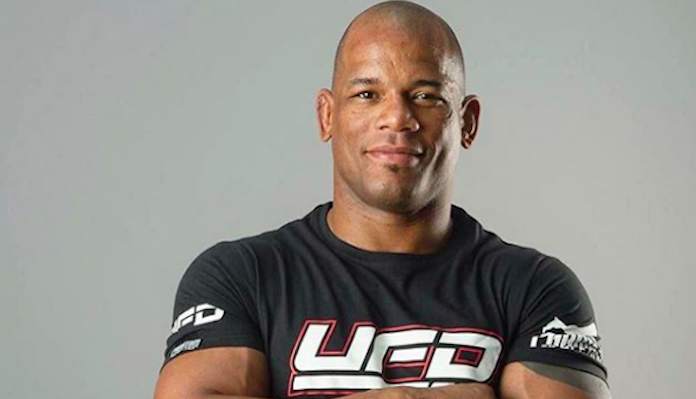 Though it was buried under the many compelling features of the main card, UFC 222 also featured an interesting middleweight showdown between former Bellator champion Hector Lombard and TUF veteran CB Dollaway.

Regrettably, this fight ended in controversy, as Lombard put Dollaway down with a volley of punches that occurred split seconds after the first round ended. He was disqualified for this perceived foul, which in turn meant a bizarre and surely undesirable DQ win for Dollaway.

In the wake of this unfortunate twist, Lombard protested his DQ loss, arguing that the punches he threw were simply a reflexive response to a kick thrown by Dollaway, and that it was on the referee to separate them when the round ended.

“It was in action,” Lombard told MMAJunkie backstage at UFC 222. “You know, we’re exchanging. He threw a kick, and I’m coming back. You’re in the fight. If the referee doesn’t get in and say [stop], but if you’re in action and you throw a kick, I follow through with one-two. … The referee didn’t step in and say anything.”

Whatever the case, Lombard believes Dollaway’s failure to return to his feet after these late blows was an indication that he didn’t actually want to fight.

“I would love to [have a rematch],” Lombard said. “I know he won’t beat me, but it’s up to the UFC, up to him, whatever he wants to do. I want to get another fight quick.”

Whether he gets a rematch with Dollaway or not, Lombard now plans to appeal this result, per a statement on Instagram.

What did you think of Hector Lombard’s late combo at UFC 222, and his resulting DQ loss?