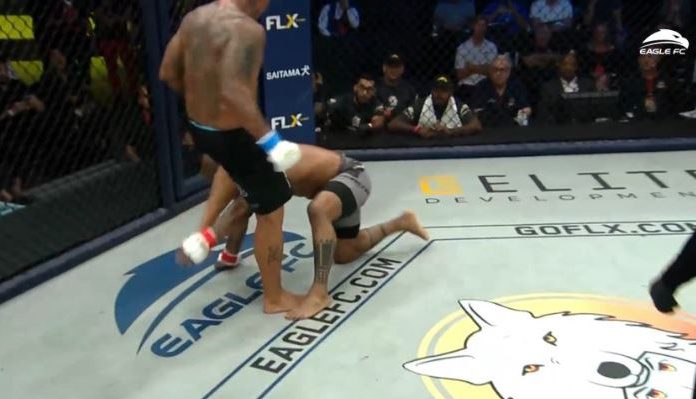 Hector Lombard got off to a strong start in the fight. The former Bellator champion landed a good combination that appeared to stun Silva. He followed that up with a flurry of punches and Thiago went down after eating a right hand. Despite some decent ground and pound, Silva ultimately survived the early scare and the fight went to round two.

Score this fight: https://t.co/2pduUAJ34x#EagleFC47: Dos Santos vs. De Castro | LIVE AND FREE NOW only on FLXcast worldwide and Combate in 🇧🇷 | Sign up NOW at https://t.co/QslxaipV9R pic.twitter.com/ba8kMKIF3E

Thiago Silva would find more success in the second frame scoring a knockdown of his own. However, after landing that big blow, Silva proceeded to graze Lombard with an illegal knee. After some deliberating, Hector decided he could not continue and the fight was waved off. The result of the bout being a no-contest.

Might be the first Eagle FC rematch? #EagleFC47: Dos Santos vs. De Castro | LIVE AND FREE NOW only on FLXcast worldwide and Combate in 🇧🇷 | Sign up NOW at https://t.co/QslxaipV9R pic.twitter.com/QPqWHNx37o

Eagle FC 47 Result: Hector Lombard vs. Thiago Silva ends in no-contest (accidental knee) at 1:44 of Round 2

Would you like to see an immediate rematch between Lombard and Silva following tonight’s controversial result?