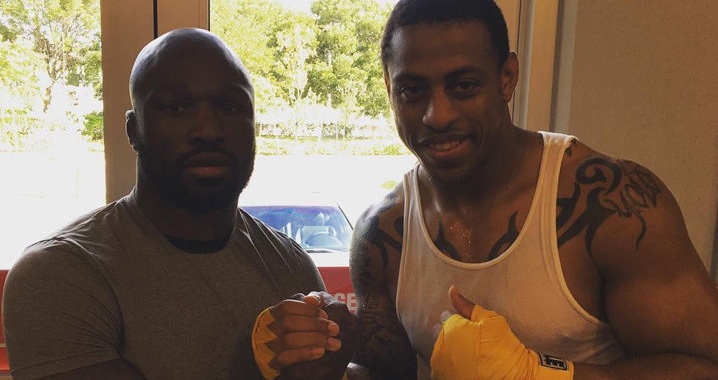 If you have Muhammed “King Mo” Lawal as one of your training partners…it will be hard for you to not find at least some success in MMA or wrestling. Mo is one of Bellator’s staple big name fighters and is next taking on their Light Heavyweight champion, Ryan Bader as part of the Heavyweight title Grand Prix. Recently, the former Strikeforce Light Heavyweight champion, King Mo caught up with the In This Corner Podcast and shed some light on how much potential that the NFL football star turned MMA fighter, Greg Hardy really has:

“I sparred with him five or six times and the last time we sparred, it was a battle. It was a battle and he gave me work and took me down. He’s a 285-pound guy and he just picked me up and just threw me. I remember the first day that he came last year, I saw him and gave him a pair of my gloves,” Lawal said. “I said, ‘Alright man let’s work on this.’ He was on the bag and he went from hitting the bag with his right hand and hook to uppercuts, learning kicks, to learning takedown defense and jiu jitsu. He’s a fast learner and he loves it.

If his head is right, he’ll be the man to be beat and a top 10 fighter,” Lawal said. “I don’t know what his chin is like because I don’t try to knock you out in sparring. But a heavyweight, a guy that athletic and big and strong … the moment he learns how to relax and think in the cage, I don’t think anyone is going to beat him unless it’s somebody that has good striking experience or good wrestling experience.

The former defensive end for the Carolina Panthers and Dallas Cowboys, Greg Hardy has made the leap across sports and found quick success. Hardy is undefeated at 2-0 with both of his wins coming by way of knockout(both under a minute and thirty-six seconds).Hardy is only twenty-nine years old but played six seasons in the NFL(although one of those seasons he only played one game in due to getting suspended for his domestic violence case). He’s set to have his third amateur bout at LFA 33 against the 2-1, Ryan Chester on February 16.

How much potential do you think Hardy has in MMA?