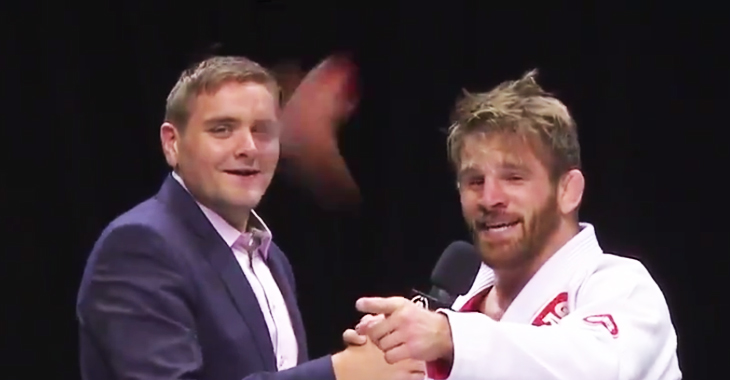 Something happened a couple of years ago; grappling got really exciting. To jiu jitsu nerds or people who sleep in their rash guards like pajamas, grappling has always been exciting, but a movement started happening that bridged the gap between the casual and hardcore fanbase. Polaris Professional was one of the tournaments — like Metamoris or the Eddie Bravo Invitational — boasting great production and altered rulesets to encourage more action that popped up and started drawing more attention to the sport. Then again, anytime AJ Agazarm is on your card, chances are you don’t need too much extra excitement. Controversy has always followed him and today’s Polaris 5 event was no different.

AJ Agazarm gets the submission after an impressive display of control! #Polaris5 #UFCFIGHTPASS pic.twitter.com/3C7leqTCal

As you can see, after scoring a submission over hometown grappler Lloyd Cooper, Agazarm dug into the London crowd on the mic with a mischievous grin. It happens too fast to tell what it is, but eventually someone runs up and throws an object at Agazarm. He and the interviewer show off some impressive head movement and stayed out of harms way. Give that guy with the mic six months of sprawl training and into the Octagon. It didn’t help AJ Agazarm any calling out “Fairy” Tonon and “Fake” Shields (Garry Tonon and Jake Shields) after mouthing off at the lively audience.

Polaris 5 is still LIVE at the time of this article’s publication on UFC Fight Pass. With no major MMA fights on the docket, this would be a great time to dip your toes into some of the best grappling you can watch.