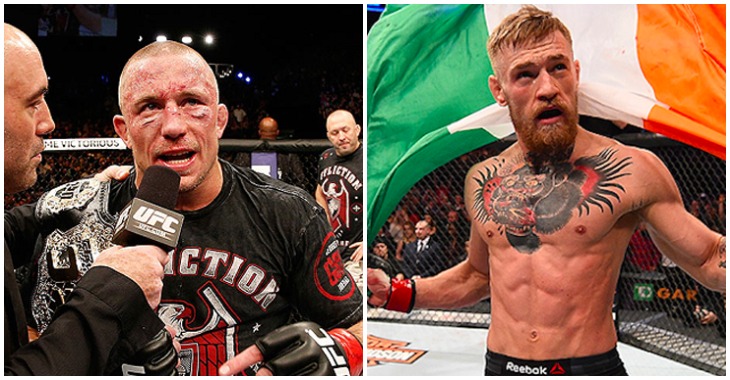 Now that Georges St-Pierre owns the UFC middleweight title, many fans are wondering what’s next for him. While UFC President Dana White has assured it’ll be a title-unifying showdown with interim middleweight champion Robert Whittaker, that’s certainly not the Canadian’s only option.

One of the more compelling choices on St-Pierre’s menu is UFC lightweight champion Conor McGregor, who he could meet at welterweight. In the eyes of former fighter Kenny Florian, however, this probably wouldn’t be a very competitive contest.

“Obviously, there’s that Conor McGregor guy who might make things interesting but I know for Georges he doesn’t really want to go down in weight too much,” Florian said on the Anik & Florian podcast (h/t MMAFighting.com). “He feels like he’s already done it all at 170 pounds and he did it in an age where the welterweight division was just ridiculous, and I think going down against 155 pounds, I don’t know if he really feels Conor McGregor is a challenge to be honest. Going against a much smaller guy and having the takedown skills that he has . . . He’s gone against a lot of other great strikers in his career, and I don’t think Conor McGregor is gonna be big enough or has the wrestling prowess to stop the takedowns of a Georges St-Pierre.”

Florian also shared his belief that we might not even see St-Pierre fight again; that he might have accomplished all he wanted in his late-career comeback.

“I think for Georges, I wouldn’t be surprised if this is his last fight. Does it get any better than this? What is he going to accomplish here that’s going to elevate his status that much more? Does he need to defeat the 205-pound champion, maybe fight Stipe Miocic? Those aren’t realistic things. Even going up to 186, everybody doubted him. ‘This is going to be too much. Michael Bisping has been more active, he’s a bigger guy.’ I don’t know if it gets better than this.”

What do you think the future holds for Georges St-Pierre?