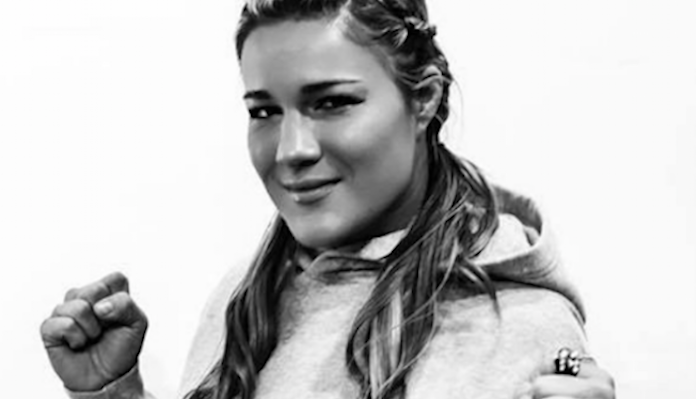 Yesterday afternoon, formerly ranked UFC strawweight contender Angela Hill took to Twitter to share her concern that her spot in the rankings had been usurped by Mackenzie Dern, who has not yet defeated a top-15 strawweight, and whose last fight was not even in the division.

Well this is a big fat slap in the face. I’ve fought top competition, beat #14 and the rankings finally grace me with #15 ranking, just to get bumped by a fucking Flyweight. pic.twitter.com/ZYlP5Ogs6w

Here’s what Herrig had to say (edited for clarity by Jed Meshew of MMA Fighting).

“I’m going to weigh in on the UFC strawweight rankings with at least 7.5lbs of factual perspective:

“1) For the most part 1-5 are pretty accurate across all weight divisions, but after that the rankings are a crap shoot.

“2) These days hype trains seem to be gifted rankings over actually having to fight to the top.

“3) Makenzie Dern misses weight by 7.5 pounds, which makes her closer to a flyweight than strawweight. She beats an unranked fighter and takes Angela Hill’s well earned #15 spot when her only actual win in the UFC as a strawweight was to Ashley Yoder. Mackenzie won by a very close split decision, while Angela won unanimously. So why does Angela get bumped??

“4) Justine Kish isn’t even in the top 15, although she beat #14 Nina Ansaroff unanimously and #11 Randa Markos. Justine did move up to Flyweight but so did Joanne Calderwood. So why is Calderwood even in the rankings anymore?

“6) I beat Alex Grasso unanimous decision, I beat Cortney Casey split. Waterson beats Casey split decision. Casey finishes Markos, while Grasso takes her to split. So the rankings should actually be: #7 Waterson #8 Herrig #9 Casey #10 Grasso #11 Markos Even if Dern made weight there is no factual reasoning as to why or how she could take Angela’s spot other than a massive glitch in the matrix.

What do you think of Felice Herrig’s take on the UFC strawweight rankings?