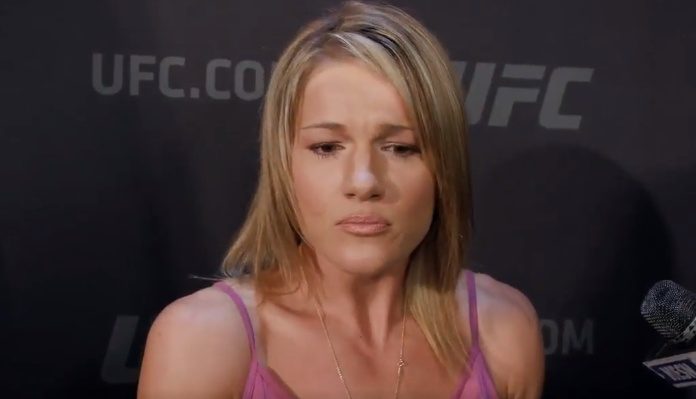 The women’s strawweight standout had previously taken to Instagram where she revealed the shocking news.

Most recently, ‘Lil Bulldog’ discussed the January 18 incident in detail. Check out what she had to say below:

“Yeah, that was really weird,” Felice Herrig said in an interview with MMAJunkie Radio. “That was the start of my Vegas journey, and it wasn’t my fault. I feel like people in Vegas are crazy… She stopped traffic to pick up a penny! Literally a penny. And I called her out on it.”

Even though she had made a remark, Herrig insisted that she continued walking up the street with her friend.

“Three minutes later, there’s somebody behind me saying, like, ‘The penny was on heads!’” Herrig said. “And I’m like, ‘I do not give a sh*t.’”

The woman was persistent and continued to bother Herrig about the penny. That is when things turned heated and the woman asked Felice Herrig “What are you going to do about it?”.

Having recently endured surgery to repair her torn ACL from April, Herrig did not want to get involved in an actual physical confrontation. However, after more words were exchanged, Felice had heard enough.

“And I’m like, ‘I’m not gonna do anything about it unless you do something about it first,’” Felice Herrig said. “If you punch me, I will defend myself. And she punched me. And I had to defend myself, so I punched her back really hard.”

Now 35-years-old, Herrig is hoping to make her return to the Octagon later this year.

Who would you like to see women’s strawweight Felice Herrig fight next? Sound off in the comments section PENN Nation!