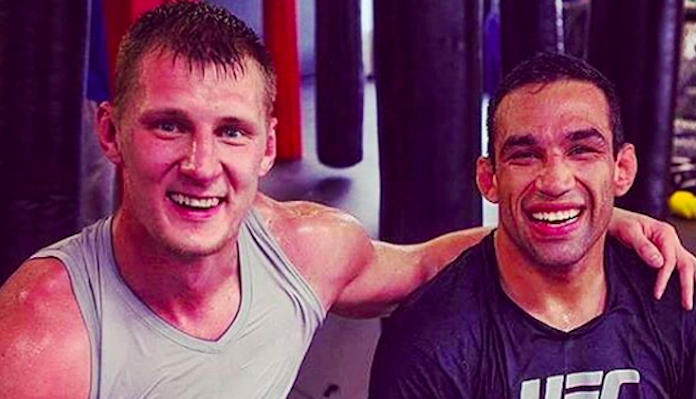 Last weekend, in the main event of the UFC’s exciting trip to London, England, former Bellator heavyweight champ Alexander Volkov stepped into the cage with former UFC heavyweight champion Fabricio Werdum. This bout stood out as one of the toughest tests of Volkov’s career thus far, not just because Werdum is such a dangerous foe, but because he is one of Volkov’s former training partners.

Ahead of his September 2016 rematch with the towering Travis Browne, Werdum invited the 6’8 Volkov to join his camp and help him prepare. The pair came to be friends during this period of preparation, which added an interesting x-factor to their UFC London scrap.

In the end, of course, Volkov was able to put his friendship with Werdum to the side and keep the contest strictly professional. That said, it doesn’t seem like it was easy for him.

On Thursday morning, the former Bellator champ took to Instagram with a lengthy post, sharing his respect for Werdum and wishing him the best going forward.

“A few days after the fight, I would like to give my respect to my opponent [Werdum]” Volkov said in his lengthy address to Werdum. “It is a honor for me to fight with such a titled fighter, and thanks to Fabricio for having accepted this challenge. It’s a sport, and each of us tried to show our maximum this evening. Training and fighting with Werdum is a great experience for me, which gives me the opportunity to develop further.
I wish Fabricio to return to the Octagon as soon as possible, and I will support him in each of the next fights, as I did before.”

What do you think the future holds for the UFC heavyweight contenders Alexander Volkov and Fabricio Werdum? Join the conversation in the comments section below!