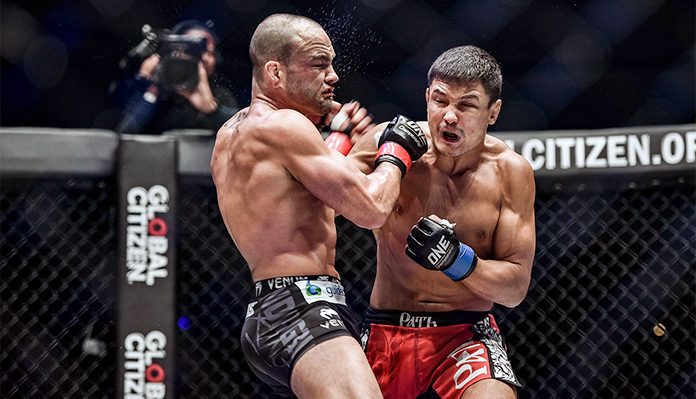 Former UFC and Bellator lightweight champion Eddie Alvarez was widely expected to blow through the competition in ONE Championship. Timofey Nastyukhin, the man tasked with welcoming Alvarez to the ONE cage back in March of 2019, didn’t get the memo.

Instead, Nastyukhin disposed of the decorated MMA champion inside one round, shocking everybody but himself.

“I knew I could beat him,” Nastyukhin told BJPENN.com.

While Nastyukhin wasn’t surprised he was able to beat Alvarez, his victory immediately stood out as one of the year’s biggest upsets, and thrust him into the MMA limelight.

“Eddie is a worldwide star, so this fight got me big exposure and it was kind of an upset for fans who did not know who I am,” Nastyukhin said. “I got some new fans after it and became more recognizable.

“My win proved level of ONE fighters,” he added.

Suffice it to say that, after his destruction of Alvarez, Nastyukhin’s career had reached a new level. Unfortunately, things hit a snag quickly thereafter.

By beating Alvarez, Nastyukhin advanced to the second round of the ONE Championship Lightweight World Grand Prix. Regrettably, an injury forced him out of the tournament, and he hasn’t fought since.

“I tore my ACL two weeks before semifinal and that was a heartbreaking experience,” Nastyukhin said, looking back on his exit from the Grand Prix.

The good news is that, after months of recovery, Nastyukhin is once again fighting fit. He’s been training hard at Tiger Muay Thai in Phuket, Thailand, and is hoping to compete in March or April.

“I have already spent one month at Tiger Muay Thai and tested my knee under heavy training, and it is 100 percent ready,” he said. “I am ready to fight. I can fight in March or April. I’m waiting for a fight offer.”

While it’s been some time since Timofey Nastyukhin defeated Eddie Alvarez, he remains one of ONE Championship’s top lightweights, and has a plethora of high-profile options in terms of his next opponent.

His goal, of course, is marching closer to the ONE lightweight title, which is currently guarded by Christian Lee. Nastyukhin believes another win or two will be enough to earn the title shot he seeks.

“It is up to matchmakers of the league,” he said of his next fight. “I can fight anyone who gets me closer to the title, any of the top athletes in ONE Championship. I think I can get title shot with 1 or 2 wins, depending on my performances.”

If Lee still holds the lightweight belt by the time Nastyukhin earns a title shot, the Russian anticipates a good matchup with the Singaporean-American.

“Christian Lee is a prodigy of MMA,” he said, praising the champ. “He is a rapidly developing athlete and a well-rounded fighter. It would be nice to meet him some day.”

Nastyukhin is also open to a future rematch with Alvarez to prove his 2019 victory wasn’t a fluke, although he’d like the title to be on the line in this prospective do-over.

“If it will be a title fight, I think this fight will make sense for both of us,” he said of a potential rematch Alvarez.

Whatever the future holds, Timofey Nastyukhin is simply excited to return to competition and build on the momentum of his unforgettable defeat of the former UFC and Bellator champ.

“I am excited for my return to the ONE cage and for new spectacular fights with strong opposition,” he said. “The ONE title is my ultimate goal and I’m focused on it this year.”