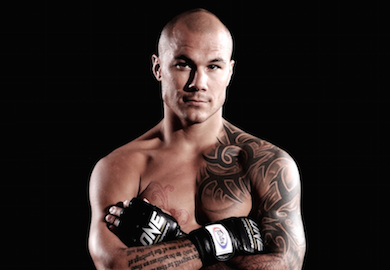 One of the most exciting lightweight fighters in mixed martial arts storied history, Roger Huerta (21-7-1 MMA), is set to make his long-awaited return to the ONE FC cage this August in Dubai.

The former UFC star and “Sports Illustrated” cover athlete has been out of action for almost 2 years now, this after suffering a loss to welterweight Zorobabel Moreira at June of 2012’s “ONE FC: 4” event in Malaysia.

The 31 year-old is now returning to the 155-pound ranks, where he had his best success, including a 6-2 run with the UFC.

Waiting for Huerta at lightweight is undefeated Englishman Christian Holley (10-0 MMA), who will be making his ONE FC debut.

BJPenn.com’s Chris Taylor recently got in touch with “El Matador,” who answered the following questions about his return to MMA, coaching/training in Thailand and his August opponent Christian Holley.

Here is what Roger Huerta had to say:

Taylor: Fans have not had the chance to see you in action since June of 2012, when you suffered a loss to Zorobabel Moreira at the “ONE FC 4: Destiny of Warriors” event in Malaysia. After such a long layoff, what influenced your decision to return to the ONE FC cage?

Huerta: It was through my team here at Tiger Muay Thai. I understood that I could finally have a proper training camp because of these guys around me. Our team (Team Banter), have got me back into “fight shape” and I am ready to compete again.

Taylor: Your last two contests took place at 170-pounds, but your upcoming bout marks a return to the lightweight division (155-pounds), where you had the best success of your career. Can you talk a little about your experience as a welterweight and why you made the decision to drop back down to 155-pounds?

Huerta: Welterweight was a bit tough. I got to fight some heavy guys there. My decision to move back down to lightweight was because that is my natural fight weight. I have to do a lot of cardio to get to that weight (155). Where as at welterweight I didn’t have to, since I already walked around at 170-pounds.

Taylor: MMA Fans and media alike were very excited when word spread that “El Matador” was scheduled for another fight in ONE FC. What are you looking to prove this time around and is your eventual goal to compete for the ONE FC Lightweight World Title?

Huerta:  My goal at the moment is to defeat my opponent on August 29 in Dubai and to enjoy being in the moment. What will happen in the future… Who knows.

Taylor: What do you know about your undefeated opponent Christian Holley and how do you plan on defeating him this August?

Huerta: I know that he is undefeated, which makes him tough. I will try to solve that puzzle come fight day.

Taylor: You moved to Thailand back in 2010. How has living in the “Land of Smiles” changed you as a person and as a fighter?

Huerta:  Things are just a lot simpler here for me. I get to enjoy my job and enjoy the island as well. It’s been a blessing. As far as a change.. Not really. I’ve always been the same person. I’m just getting more experience with age.

Taylor:  You have been instructing/training at Tiger Muay Thai in Phuket, Thailand, for some time now. Is it safe to assume that you will spend the majority of your training camp for this fight at “TMT”?

Huerta: Yes, for sure. Will Elliot (Director of Tiger Muay Thai) and everyone else at the camp have been great to me.

Taylor: I actually had the pleasure of getting to meet and train under you at Tiger Muay Thai for a couple of days in 2012 and found you to be an excellent instructor. Is coaching something you intend to keep doing long after your fighting career is over?

Huerta: Definetely. I never knew that I would enjoy coaching as much as I do. I believe that coaching is something I will continue to do until the day I die.  🙂

Taylor: What should fans expect to see from 2014 version of Roger Huerta?

Huerta: I’m not sure… I guess we will have to wait and see.

Taylor: You have fought and defeated some of MMA’s best fighters at 155-pounds. You had three “Fight of the Night” performances while a part of the UFC. Which of your past fights are you most proud of at this point in your career and is there any particular fight that you wish you could do-over?

Huerta: I’ve learned a lot from every fight I have been in over the years. And, if I could have it my way, I would like to do-over all my defeats.

Taylor: Any last words from “El Matador” for your fans, sponsors or future opponent?

Huerta: I would like to thank everyone at Tiger Muay Thai. Without them, I’m not sure I would be returning to compete again. They make everything possible. Much love to them and all my supporters.

Roger Huerta vs. Christian Holley takes place on the main card of the “ONE FC 19: Reign of Champions” event set for August 29 in Dubai.  The entire event streams as an online pay-per-view in North America.