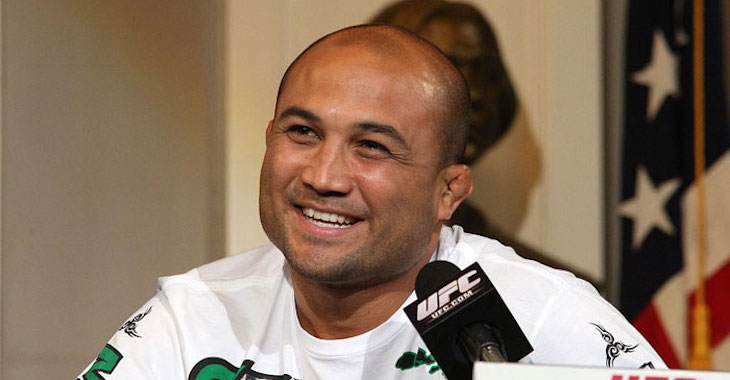 We would not being doing our job as journalists if we did not track down BJ Penn and ask him what everyone is wondering, which is why he took the IV back in March.

“Ok do you want the short version or the long version?” asked Penn.

Of course BJPENN.com always demands the full version. So we asked Penn who gave him the IV, where he met the doctor and where this all took place. This is what the UFC Hall of Fame fighter had to say:

“The first time I heard about these doctors was when I was busy training at the Jackson-Wink gym in New Mexico. The doctors came by Greg Jackson’s gym to help athletes with various issues including eye problems, concussion symptoms and brain trauma. Unfortunately I was busy training for my upcoming fight, so I didn’t get a chance to work with the doctors at that time.

After my fight got cancelled, a couple of fighters invited me to come down to Dallas with them to meet with these same doctors. I thought ‘why not’ as I have had prior concussions, I deal with vertigo and well you have seen how many times I have been hit during my career. I figured if there was any chance that this could help my vertigo, motion sickness or maybe even improve my vision, as I have a lens from a previous cataract, then this was a good thing.

We were doing some of the different exercises for vision, motion sickness and vertigo and then following my physical, one of the doctors suggested that I take a glutathione IV.”

Penn went on to explain the purpose/benefit of taking the IV:

“They said that after doing a physical on me and taking a look at my symptoms, a glutathione IV would be great for me. They told me that having the glutathione administered through an IV would be the best way for my body to absorb the antioxidant.

So the first thing I told them was that I am signed up with USADA year-round, so we have to take a look at their ‘banned substances list’ and make sure there is nothing in there.

Once we discovered that nothing in the IV was on the banned substance list, I let the doctor administer the IV.

I was so focused on USADA’s banned substance list that I never gave any thought to the IV except for the fact that sometimes people had used them after weigh-ins before a fight.”

I know you’ve had to answer this question a few times now, but does BJ Penn still believe that IV’s are for wimps?

“Of course they are for wimps when the IV is being used to rehydrate a fighter who has nearly killed himself cutting weight so that he can fight a smaller man. If you are using an IV for that purpose, then of course you are a wimp and I’ll tell anyone that to their face. On the other hand, if someone gets in a bad car accident and needs an IV for a blood transfusion, am I going to call them a wimp? Of course not! That absolutely outrageous, you know seriously who am I addressing here. This is a first-grade conversation. I’m sorry if I offended any haters or fans of fighters who have to take IV’s so that they can fight smaller men and not get cut from the UFC but it is what it is.

You recently returned to your home in Hawaii, what is the plan going forward for your fight career and will you return to Greg Jackson MMA?

“Of course I will return to Greg Jackson. I feel that I have made a lot of improvements by training at his gym. I think Greg would agree. At this point I just want to fight. I want to show the world how great I am.”