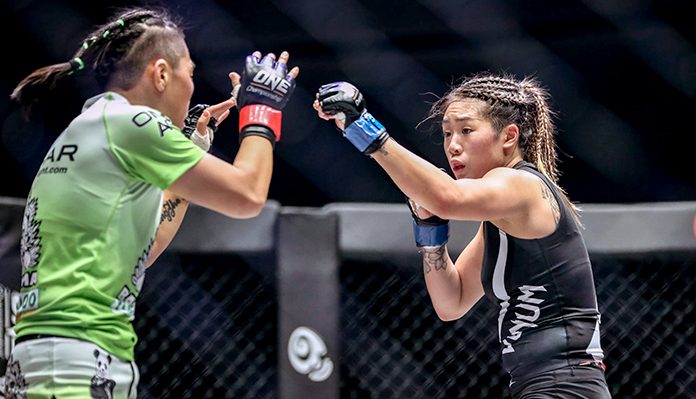 It’s been a tough year for Angela Lee.

After failing to wrest the ONE strawweight title from the waist of Xiong Jing Nan in March, the ONE atomweight champ came up short in another strawweight contest opposite Michelle Nicolini in July.

Yet in a few short days, Lee has the chance to right her ship and close out the year on a high note. In the main event of ONE: Century – Part 1, she will look to defend her atomweight title against her recent foe, the strawweight champ Xiong.

Despite her recent losses, Lee assures she’s focused and confident ahead of this fight.

“In this game, your mental strength is what takes you far,” she told BJPENN.com ahead of her fight. “That’s what I needed to get back, and now I’m focused and hungrier than ever.

“I feel those the losses in March and July needed to happen in order for me to get to the next level that I needed to be at,” she added. “They were used as a lesson for me. Even though it was just in the last year, I’ve grown so much. I’ve grown tremendously as a mixed martial artist and that growth wouldn’t have been able to happen maybe if I had won those fights. So I’m truly grateful for it. It’s made me extremely motivated. I know how much is on the line, I know how much is at stake in this next fight, and I’m ready to defend my title.”

While Lee enjoyed fighting at strawweight, she’s excited to once again compete in the division where her career began. She expects to show the best version of herself in her traditional weight class.

She also admits her preparation for her first bout with Xiong was not her best. She was recovering from a back injury at the time — the same injury that delayed her planned November, 2018 meeting with Xiong — which unsurprisingly slowed her down in training.

“Where I see my fault in that [first] fight is my preparation,” Lee said. “I feel like I wasn’t able to prepare as well as I needed to in terms of cardio because I was just recovering from my back injury.

“I don’t want to be one of those people that just throws out an excuse like that,” she added. “But, you know, I was really affected by it. I mean just being injured in November, having to cancel that fight and reschedule for March… I’m a really impatient kind of person so I wanted to get back in there as soon as possible. Sometimes it’s a good thing, sometimes it’s not such a good thing.”

The good news is that Angela Lee is feeling strong and injury-free as her rematch with Xiong Jing Nan looms on the horizon.

“I’ve been really blessed that I have had no injuries come up since,” she said. “I’ve been able to train hard and push myself to the limit.”

With her mind and body healthy, Angela Lee is confident she’ll deliver an impressive performance in her imminent bout, and regain the confidence of the fans.

“I think that people, when they watch this fight, they’re gonna be like ‘Angela’s back,'” she said. “I think I’m going to be able to full play my game. In the past few fights, it hasn’t been like that. It’s been frustrating for me because, as a fighter, the the most important thing is that you’re able to perform to the best of your abilities. In my past few fights, I feel like I wasn’t able to do that. But I feel like everything’s changed. This camp, we really put everything into it. We made sure we didn’t cut any corners. We made sure we’re solid in every single area. That’s the confidence that I’m gonna be bringing with me in the fight.”