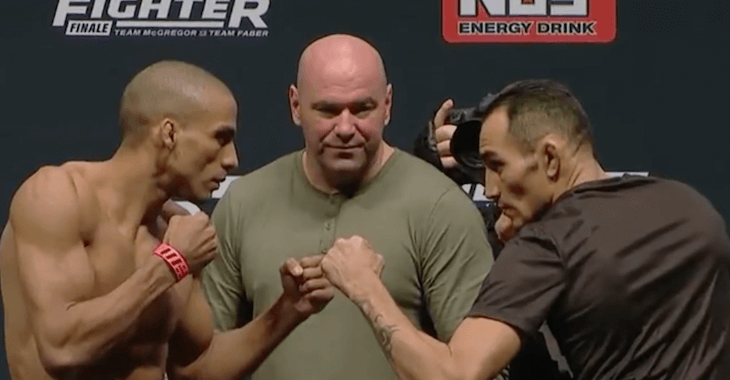 Last night, the UFC returned to our screens with UFC Fight Night 106. The card produced plenty in the way of memorable finishes, as Kelvin Gastelum zapped Vitor Belfort in the main event, and aging Pride legend Mauricio “Shogun” Rua dazzled with a third-round stoppage of Gian Villante in the co-main event. Of the many impressive stoppages on this card, however, none were quite as jaw-dropping as Edson Barboza’s knockout of fellow lightweight contender Beneil Dariush, which he produced with a rocket-fuelled flying knee to the chin.

With this win, Barboza extended his win-streak, as he has defeated former UFC lightweight champ Anthony Pettis and former Strikeforce lightweight champ Gilbert Melendez in his next most recent bouts. Riding high off these wins, Barboza is now eager for a shot at lightweight gold – but not against undisputed champ Conor McGregor, who is currently transfixed on a possible boxing mega-fight with Floyd Mayweather.

Instead, Barboza has set his sights on an interim lightweight title fight with Tony Ferguson, who was recently left without an opponent when Khabib Nurmagomedov was forced out of a scheduled fight for interim gold on the eve of battle. Barboza has met Ferguson once before, coming up short against the American in a wild, Fight of the Night winning scrap back in December of 2015.

Barboza spoke to the media about this prospective rematch shortly after his defeat of Dariush. His words (via MMAJunkie.com):

“Imagine it, guys. Me and Ferguson, five rounds? That’d be crazy, guys. Please UFC, give me a chance.”

Would you be interested in seeing Edson Barboza and Tony Ferguson rematch for interim lightweight gold? Sound off, PENN Nation!