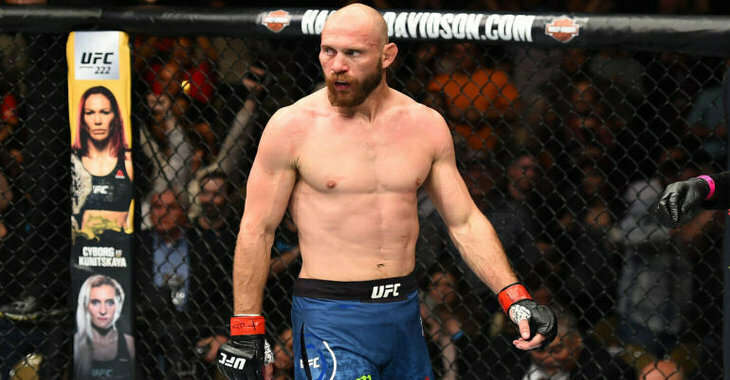 In the main event of the UFC’s Sunday return to Austin, Texas, Donald “Cowboy” Cerrone rebounded from a three-fight skid with a first-round TKO victory over Yancy Medeiros, who was riding a three-fight win streak coming into his first ever UFC Main Event contest.

Following the bout, Cerrone was relieved to have finally gotten back in the win column and, when asked what was next for the man tied for the most wins in UFC history, he set the record straight. He intends to return to the UFC’s lightweight division for one last run at the title. In particular, Cerrone called out Khabib Nurmagomedov, a fighter he was scheduled to fight against in May of 2015 before Nurmagomedov withdrew due to injury. Nurmagomedov is currently scheduled for a main event bout at UFC 223 against current interim lightweight champion Tony Ferguson, so that bout is unlikely, but there are many other matchups at lightweight that fans could easily get behind for Donald Cerrone.

Let’s take a look at three of the most compelling options. After a hyper-active career inside of the UFC, one would be hard-pressed to find elite opponents in the lightweight division that have not yet crossed paths with Donald Cerrone. Kevin Lee is one of the few that have not yet had the chance to stand across the Octagon from Cerrone and it’s a matchup that would guarantee fireworks. Kevin Lee earned an interim title shot against Tony Ferguson after amassing a five-fight win streak that included four finishes. Following his unsuccessful title bid, the boisterous “Motown Phenom” is looking to step back in the cage soon against a top ranked opponent. With Cerrone’s active schedule, he could be just what Lee is looking for. With Lee’s pre-fight antics and the ability to back up every word inside of the cage, a match with Cerrone would be one for the ages. It’s a headline-caliber fight that could be booked sooner than one might think. Following a win over Francisco Trinaldo on the card headlined by Donald Cerrone’s win over Medeiros, James Vick made his intentions known. With a 9-1 record in the UFC and wins in his last four fights, Vick has set his sights on the top of the division, and has called out the likes of Tony Ferguson and Khabib Nurmagomedov. While Vick’s aspirations for his next fight are inspiring, it’s unlikely that he’ll get a top-3 fighter in his next bout. That said, Vick has undoubtedly earned a step up in competition and a fight with Cerrone would be a solid litmus test to see if “The Texecutioner” is truly ready for the upper echelon of the UFC’s lightweight division. Since his win over Trinaldo, Vick has been vocal about a potential fight with Cerrone stating it’s a fight he’ll be gunning for in the near future. A win for either guy sets them up for a huge fight with title implications for late 2018. Nate Diaz and Donald Cerrone have already squared off once in the UFC, back at UFC 141 in 2011. After a wild lead-up to the fight, the pair delivered in the Octagon for a Fight of the Night performance that saw Nate Diaz declared the victor by unanimous decision. Since then, the two have had interesting career trajectories that saw Cerrone challenge for a lightweight title and go on to a successful run at welterweight, while Nate Diaz partook in two of the UFC’s biggest fights ever in wars with current lightweight champion Conor McGregor. With Nate Diaz looking to get back in the Octagon soon following a layoff of more than a year, a rematch with Cerrone would be a great way to welcome Nate back to the cage and Cerrone back to the division that made him a star. If we learned anything from their first fight, it’s that there’s no way the pair can put on a lackluster performance both in the lead up to the fight as well as when they’ve finally locked horns in the cage.