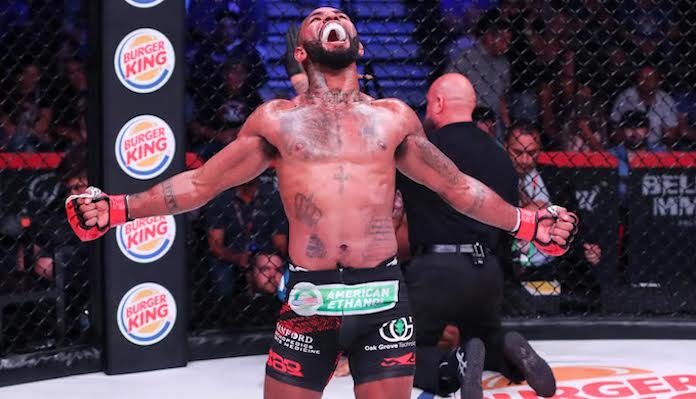 Apparently, he wasn’t surprised, and hopes the loss serves to humble the cocky Gallagher.

“I wasn’t surprised [by Gallagher’s loss],” Caldwell told the media post-fight (via MMAjunkie). “It didn’t come as a shock to me. The kid still has room to grow. He’s an up-and-comer; let him do what he’s going to do. But you’ve got to stay humble. Hopefully that was a humbling experience for him to realize you’re really with some killers out here. We’re not playing.”

As for that potential fight with James Gallagher? Darrion Caldwell is currently focused on winning gold in the Bellator featherweight division. Now that Gallagher has lost, the fight is even less of a priority for the champ than it was before.

For what it’s worth, Gallagher seems to be taking the loss in stride. Post-fight, he assured his cocky attitude isn’t going anywhere, and that the best is yet to come.

Do you think we’ll ever see James Gallagher and Darrion Caldwell fight?