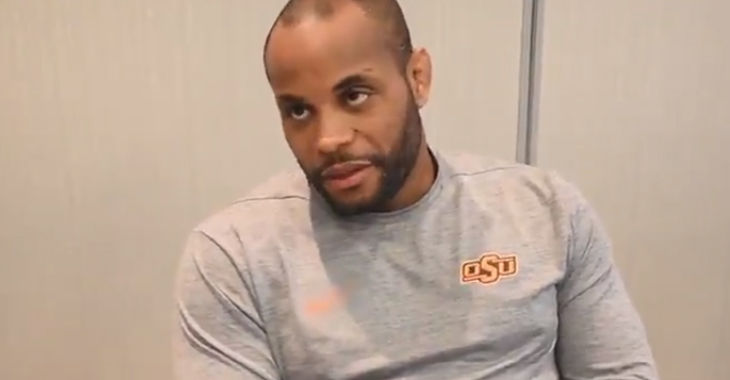 Going into this fight with Volkan Oezdemir, Daniel Cormier is a man on a mission to rid him of the funk that still lingers from his loss to Jon Jones. So, the last thing he wants to do is hear from his longtime rival before his big title defense at UFC 220. When the UFC crew put a lap top in front of Cormier and told him that Jon Jones had a message for him, you could tell he wasn’t happy. Although, there was a big plot twist. It ended up being a Jon Jones that Daniel Cormier didn’t expect at all.

Good luck @dc_mma, and thanks @UFC for letting me be silly! 🙂

“Hey DC, Jon Jones here or at least one that’s a little bit friendlier than the one you’re used to. I’m @jonjones on Twitter so I get all the other guy’s hate mail. Anyway, I just wanted to say I’ve been binge watching your fights and ou kick ass man. I’m a fan. You’re an incredible fighter and you seem like a cool guy and a great dad. I just wanted say, good luck, you got this. Just one piece of advice to give, I’ve heard a lot about that ‘Volkan’ death grip so, watch out for that one. Good luck, champ. You got this!” — Jon Jones speaking to Daniel Cormier.

The reaction of Daniel Cormier before, during and after the clip is priceless. Obviously, Daniel Cormier isn’t familiar with the internet MMA Twitter cult icon that is the other Jon Jones. If you’re not familiar either, he routinely updates and shares all the direct messages and mentions he gets thrown at him that are directed at the former UFC light heavyweight champion Jon Jones. As you can imagine, this results into some hilarious content. Maybe this may be a good luck charm going into Cormier’s big title defense tonight.