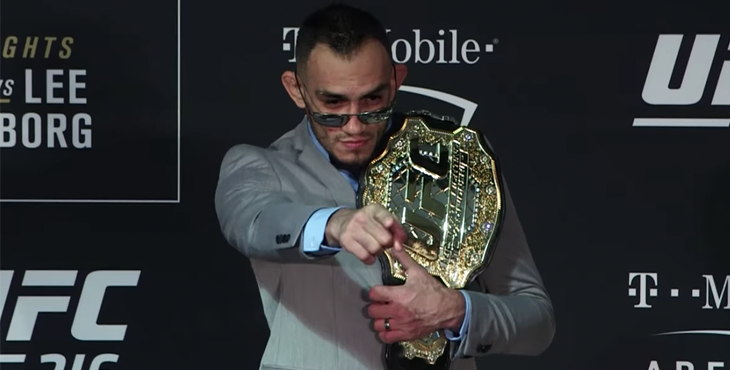 After the UFC 223 press conference yesterday, a lot of people were confused. Dana White has since tried to clarify, but the UFC’s lightweight title picture is still murky. Conor McGregor hasn’t been stripped, yet Tony Ferguson‘s upcoming fight with Khabib Nurmagomedov is for the undisputed belt. Basically, the UFC is waiting until McGregor gives them the word on whether he’ll defend his belt this year, which will then determine if UFC 223’s main event will be for an interim or the real gold strap. None of it matters to Ferguson though, in his mind, he’s already the real champ and has been since UFC 216.

“That is exactly right. I am the undisputed [lightweight] champion. Regardless if [Conor] McGregor comes back or not, we know it was just a big show. The big fight is with me, my fight [with Khabib Nurmagomedov], which is at hand. I’m going to put my 10 fight win record in a row up to 11. What sounds better than 10 in a row? 11. What sounds better than 13 and 1? 14 and 1. So, regardless of what the company does or whatever with the belts, I’m still the champ. I don’t care. That’s [the UFC’s] politics. My politics is this inside that Octagon. So, I have management that will handle the business and do all the other things so I can focus on what’s really important. And that’s Team Tiramisu.”

Tony Ferguson says Conor McGregor turned down a chance to fight him pic.twitter.com/NoR5UXFYyt

“I’ve been slapping [the sharks at lightweight] and riding the wave with it too, that’s the best part about it. This division is amazing. I come from 170 pounds so I ca’t wait to go back up there and shut some mouths up, because a couple of them need to be shut. 155 is a great, talented division. It’s very young. I’ve raked through everybody and everybody moved divisions, so that’s a blessing too. Like I said, this is a great sport. I’m honored to be able to do what I do and I’m f-cking good at it, man. I love being able to beat people up.” —Tony Ferguson speaking to Aaron Bronsteter of TSN.

Whether you want to get caught up in the convoluted UFC lightweight title drama or not, there is no denying that Tony Ferguson’s fight with Khabib Nurmagomedov is the single best lightweight scrap available in the entire world at this time. It was the last time it tried to get booked. If you can manage it, it’s a whole lot more enjoyable to just ignore the title and focus on this insane fight that everyone hopes we finally get. This is the fight the lightweight division, as well as both fighters, deserve. It’s going to be a long, suspenseful wait until UFC 223.