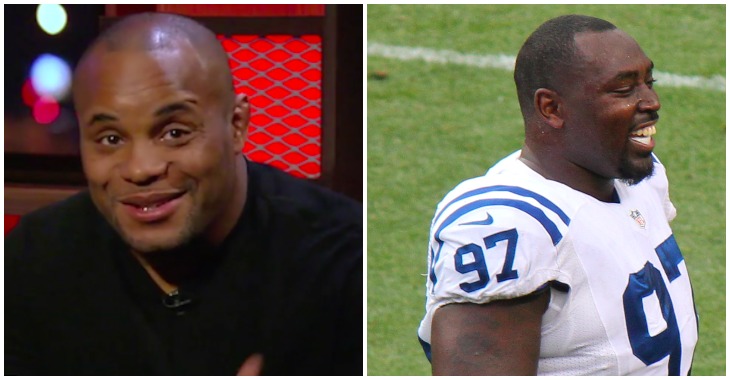 Arthur, the eldest Jones brother, is a star in his own right. An NFL Defensive tackle standing at 6’3 and 320 pounds, Arthur Jones has won two Super Bowl championships, and been named to the All-Big East First NFL team twice over the course of his career. In addition, Arthur has been praised by Jon Jones for his fighting skills in the gym as well. Prior to the ceremonial UFC 214 weigh-ins on Friday, Arthur was involved in a bit of a verbal spat with Daniel Cormier’s team. He recalled the situation to MMAFighting:

“They were like, ‘The real champ’ and all this other bullshit,” Arthur Jones said. “After a while, I got annoyed. I was like, ‘Yeah, the paper champ.’ We started jawing back and forth. They just walked away. It really wasn’t nothing. People try to make a big thing out of nothing.”

“I would have ragdolled all six of them — for the record,”

Arthur revealed that he heard one of the men making a crack at him, saying “fail another drug test”, a dig at Arthur failing an NFL drug test, something that didn’t sit too well with the NFL player.

When asked what would have happened if Cormier himself got involved, Arthur stated:

“He called my brother a junkie and ‘sandblasting prostitutes,’” Arthur said. “My brother has daughters. One day, they’re gonna have to watch this shit on YouTube and I don’t appreciate it. My brother never disrespected his family, so don’t disrespect my brother’s family.”

Jon Jones will of course now have the opportunity to silence Cormier and his team tonight in the main event of UFC 214 in the pair’s highly anticipated rematch.