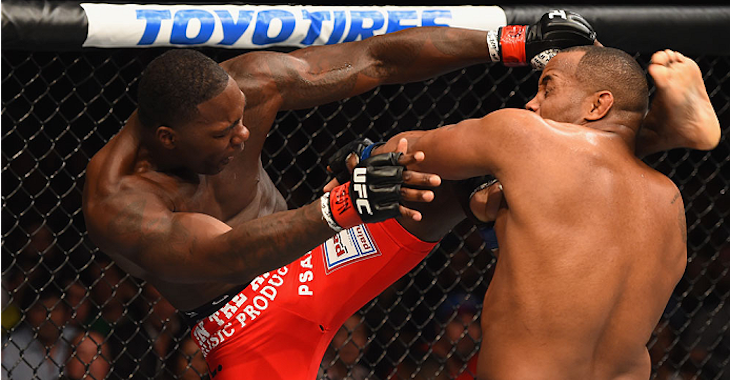 In May of 2015, Daniel Cormier and Anthony “Rumble” Johnson fought for the interim UFC light heavyweight championship. In the end, Cormier would use his Olympic-caliber wrestling to ground this fight and lock up a fight-winning rear-naked choke in the third round. Yet the Olympian very nearly didn’t escape the first round, as he was nearly finished by a rocket-fuelled Rumble punch just moments after the bout began.

Today, Cormier has been elevated from interim champion to undisputed champion, and Rumble has bounced back from his loss to Cormier with three straight knockout wins. As such, a title rematch between the two light heavyweights appears to be imminent.

Despite having gotten a taste of Rumble’s legendary power in their first encounter, Cormier recently promised Rumble that he’d stand and bang with him in a possible second fight.

December 30th I'll be waiting for ya. No wrestling! I'll give u a shot! #howamisogiving I'm gonna knock you out! https://t.co/rUY0bSVflW

Given the way the standup exchanges unfolded in their first fight, Rumble seemed quite amused by this promise.

This prompted Cormier to re-up on the agreement, as he vowed to not only stand with Rumble, but knock him out – something nobody has done before. He also claimed Rumble doesn”t hit as hard as people think – though the Blackzilians rep’s 16 knockout wins suggest otherwise.

Truth I'll knock you out before u knock me out. U don't hit as hard as people think. I'll stand right in front of u https://t.co/zA5JkQMQyM

Rumble hits hard sure, but everyone hits hard. I hit hard too. Im ready to stand and bang with you Rumble.https://t.co/jgqhXfMeab

As Cormier’s first tweet suggests, he’s hoping this fight will be added to the lineup of UFC 207 on December 30, when is teammate Cain Velasquez is expected to rematch former foil Fabricio Werdum. If Cormier vs. Rumble 2 were added to this card, it would likely serve as the evening’s main event.

That said, the possible return of former champion Jon Jones casts a long shadow over the whole arrangement. If the recently-suspended great is allowed to return, he could well be given an immediate title shot against Cormier, who he defeated back in January of 2015. UFC president Dana White has also suggested he’s be interested in assembling a Jones vs. Rumble fight to determine who gets the next crack at Cormier.

Is Daniel Cormier crazy for promising to stand with Anthony “Rumble” Johnson? Sound off, PENN nation!