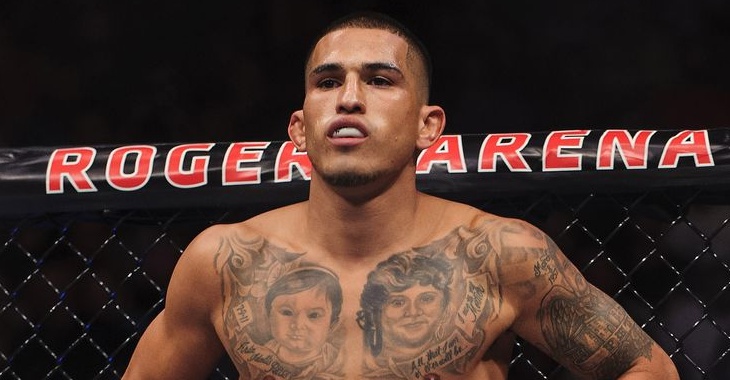 UFC 223 continues to grow! Already off to a hot start with two title fights and three Lightweight fights in total…it looks like another might be getting added! ESPN’s Brett Okamoto reports that a showdown between season 15 winner of The Ultimate Fighter, Michael Chiesa and former WEC and UFC Lightweight champion, Anthony Pettis could be in the cards for the night of action in Brooklyn, New York.

Per sources, UFC is targeting a lightweight bout between Anthony Pettis and Michael Chiesa for UFC 223 on April 7 in Brooklyn.

Per sources, UFC is targeting a lightweight bout between Anthony Pettis and Michael Chiesa for UFC 223 on April 7 in Brooklyn

The last time that we saw Michael “Maverick” Chiesa, he was on the losing end of a somewhat controversial finish. On June 25th of 2017, Kevin Lee defeated Chiesa via first-round submission with a rear-naked-choke. The controversy came during the finish when the referee, Mario Yamasaki stopped the fight before Chiesa tapped and when he appeared to not be unconscious as he protested immediately after the stoppage.

Prior to this loss, Chiesa was riding an impressive three-fight win streak with wins over the likes of Beneil Dariush and Jim Miller who he both submitted. Chiesa is 7-3 in the UFC and 14-3 overall in his MMA career.

Pettis has gone through his struggles recently as he’s gone 2-5 in his last seven fights with his last winning streak coming in 2013-2014. His last fight was in November against Dustin Poirier in the main event of UFC Fight Night 120 on Norfolk, Virginia.

A win would be huge for either fighter, more so Pettis due to his inconsistency as of late but Chiesa wouldn’t want to be that guy to help him get back on track. Regardless of the outcome, it’s a fun matchup on what is shaping up to be a very fun card.