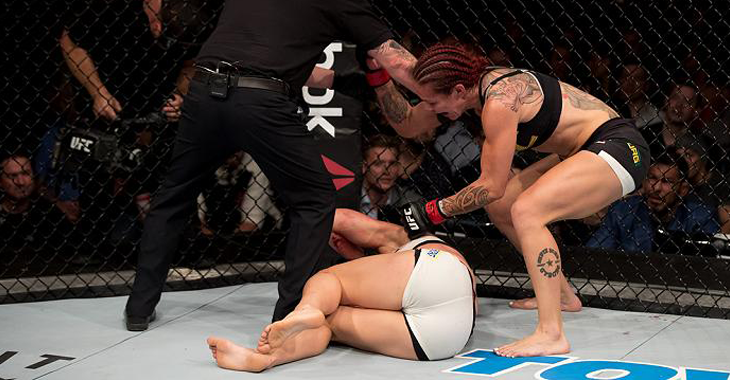 After the hard reset of the UFC’s women’s featherweight division, things still don’t seem like there will be smooth sailing moving forward. Technically, there is only one fighter even in the division, that women being the champion Cris Cyborg. Germaine de Randamie gave up her title and ran all the way back to bantamweight, and it seems like Holly Holm did the same. That won’t stop Cyborg from going after Holm to pursue a real, 145lb contender to fight her in a title defense. Cyborg makes a point to MMA Fighting that no matter how much Holm runs, she will find her.

“She’s never KOed one girl. Her last punch with Bethe Correia. Three rounds, maybe six punches. They had to stop the fight and say, ‘Hey girls, I don’t know what the plan is but let’s start fighting.’ I don’t think she’s very aggressive. I don’t think she’s going to be really dangerous. I think it would be an exciting fight because I like to fight and I’m going to find her. She’s going to run in the ring, but I’ll find her. She’s already run three times. I was supposed to fight her in Curitiba, I agreed to fight her 140 and she did not want to fight. Then, I said fight in Brazil, and she said she’d fight me at 138, not 140. And after this fight, when Megan Anderson pulled out of the fight, I said I’d like to fight Holly, she said no. […] Three time she run from this fight.” You have to feel for Cyborg, she’s finally the champion of a division literally created for her and she has no one to fight. Even a Megan Anderson back-up plan is contingent on Anderson to resolve her issues which prevented her to fight before. Does the UFC put together an Ultimate Fighter season? Do they start to import women fighters from all corners of the world? Let’s hope Holm accepts the fight and the UFC makes it happen, it’s honestly the best and only women’s featherweight title defense that the organization can make.