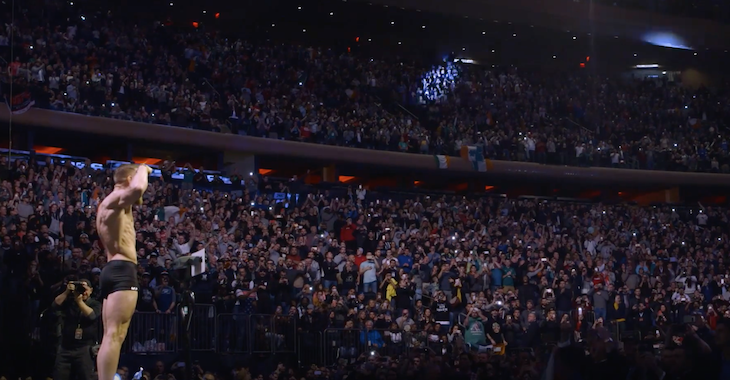 Earlier this month, UFC featherweight champion Conor McGregor successfully made his UFC lightweight debut as he TKOd Eddie Alvarez in the second round of their UFC 205 main event scrap, entering himself into the UFC history books as the first man to simultaneously hold two UFC championships.

Leading up to the fight however, McGregor was involved in several disputes with welterweight champion Tyron Woodley, who retained his welterweight strap in the co-main event as he fought Stephen ‘Wonderboy’ Thompson to a majority draw. The first incident was a minor one, which set the stage for several heated run-ins throughout the remainder of fight week. During the UFC 205 pre-fight press conference, McGregor stated that he was coming for “all” of the belts on the table, which included Woodley’s welterweight championship.

Near the time of the early weigh-ins on Friday, McGregor and Woodley came face to face in a heated impromptu staredown as Woodley walked past McGregor without acknowledging him. Following that, McGregor and Woodley were then involved in yet another backstage altercation that saw security guards forced to keep McGregor away from Woodley. That came after a bitter war of words on social media, which saw McGregor repeatedly call Woodley a “bitch”. Following McGregor’s win over Alvarez n the main event, talks of a potential McGregor vs. Woodley matchup for the welterweight belt began to heat up.

Now, 5Dimes has released the odds for 4 potential fights for McGregor, including a fight with Tyron Woodley.

To simplify the above numbers, using the Conor McGregor vs. Nate Diaz trilogy fight as an example, McGregor being a -250 favorite means it would take a $250 bet on him to potentially earn $100, whereas a $100 bet on the underdog, Nate Diaz, would potentially earn you $190.

Interestingly enough, while McGregor is the favorite in the first two fights listed, he is even with Khabib Nurmagomedov for a lightweight title fight, and the underdog in a potential welterweight title fight with Tyron Woodley.

Which fight would you be most like to see?