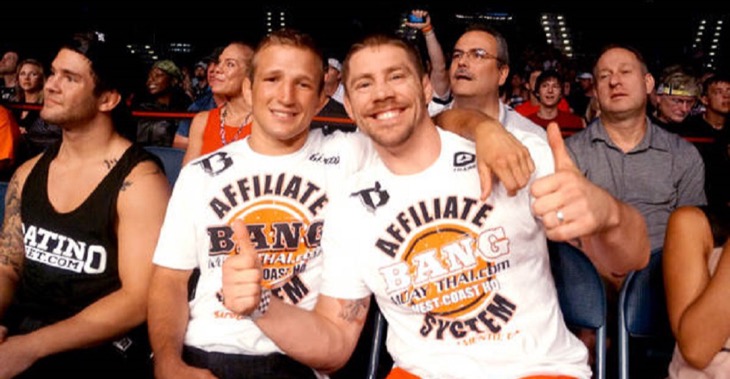 With UFC featherweight champion Conor McGregor taking on lightweight champion Eddie Alvarez at UFC 205 in just two short weeks, everyone is voicing their opinion on who they think will walk away with the 155 pound strap on November 12.

Perhaps the most valued of all opinions on the matter is Duane “Bang” Ludwig, striking coach for former bantamweight champ TJ Dillashaw, who’s MMA analysis is often sought after due to his insight on striking and footwork.

Ludwig spoke exclusively with BJPENN.com Radio on Wednesday and revealed his thoughts on a hypothetical Dillashaw vs. McGregor matchup as well as his pick for who will win between the 145 pound champ and the 155 pound champ.

“I think that TJ would actually do very well against Conor,” Ludwig told BJPENN.com Radio. “TJ’s footwork and output, and the way McGregor gasses out. He’s not that hard to take down or to control on the ground. I’d like to see TJ fight McGregor, get him tired and then knock him out.”

“If I were in McGregor’s corner, I would be cautious in that fight. But I’m going with Alvarez, 100 percent jumping on that one.”

“I wish I could bet on that fight, but I don’t think I can,” Ludwig said with a laugh. Dillashaw most recently defeated Raphael Assuncao at UFC 200 in July, and is currently angling for a fight with John Lineker while current champ and the man who took his belt Dominick Cruz is set to defend the 135 pound belt against Cody Garbrandt at UFC 207.

Do you agree with “Bang’s” prediction for Conor McGregor vs. Eddie Alvarez? And how do you feel about Ludwig’s thoughts on a potential fight between TJ Dillashaw and Conor McGregor? Sound off, PENN Nation!