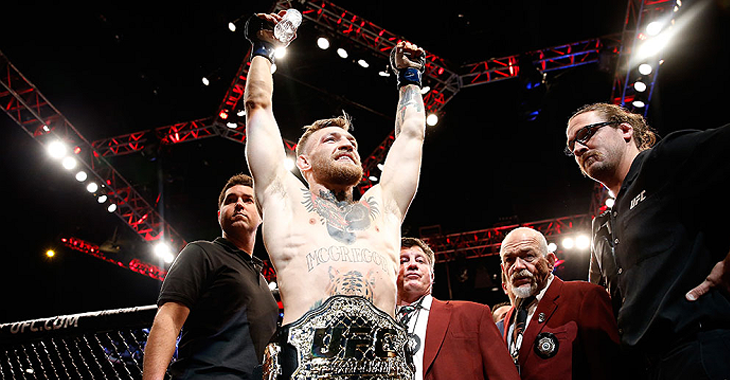 While for Alvarez, the fight gives him the opportunity to defend his lightweight belt for the first time, against arguably one of the biggest names in the sport, on the flip side it gives McGregor the opportunity to become the first ever simultaneous two-division UFC champion. In addition to potentially becoming the first ever simultaneous two-division UFC champion, McGregor could very well become just the third man in UFC history to win belts in two different divisions. Despite all of that, UFC President Dana White has maintained that if McGregor emerges from the fight victorious, he will be forced to vacate one of the title belts so as to not hold up a division unnecessarily. With that being said, ‘The Notorious’ has also remained adamant that it will take an army in order for the UFC brass to take one of his title belts.

In a recent interview with Sports Illustrated, McGregor attempted to put a temporary hold on talks of him giving up a belt until he has made history:

“Let me see the pictures on publications with a belt on each shoulder first,” he recently told SI by phone. “Let me go onto the side of that Octagon and raise two world titles, what’s never been done before, before talking about stripping me. Let me get the f—— things, let me do it.

“I’ll always listen to the correct business move and I’ll always do what is the correct move,” he added, “but let me do it and let me go back and look at some pictures of me with two belts and let me embrace it for half-a-day.”

“It’s the media that’s making this,” he said. “Let me look at the historic images we’re going to get on this night, me with these two belts. That’s what everyone should be excited about, this is history.”

“Everyone wants to see you do good, but not better than them,” he said. “That’s what’s happening here. I’m just looking forward to raising the belts, and doing what has not been done before.

“Don’t be trying to take away the historic moment before I’ve even experienced it.”

Do you think McGregor will leave The Empire State with a belt on each shoulder? Give us your predictions below PENN Nation!