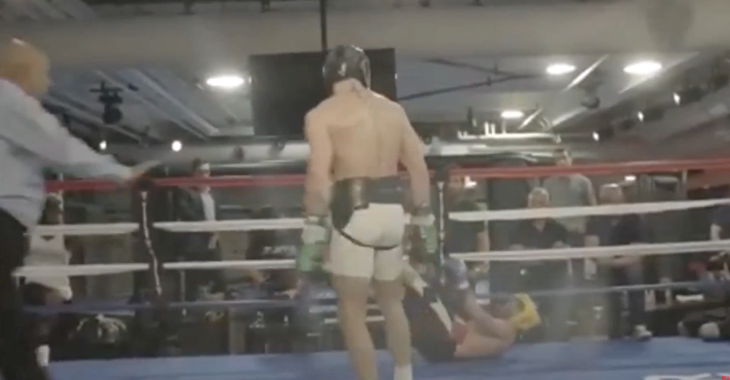 There was a big buzz late Friday when UFC President Dana White released video footage of the debated knock down/push down of Paulie Malignaggi.

Malignaggi took to Twitter to defend his case that it was, in fact, a push down while many fans, fighters, and pundits called it a knock down while some deemed it a slip.

The former two weight boxing champion and now former sparring partner of McGregor spoke on Monday’s episode of The MMA Hour about the footage being released. “You know what? This does not look as obvious as I pictured it when it happened to me,” Malignaggi said when first seeing the video for the first time after White posted the clip to his social media. “It’s just edited so good that I had to watch it like three times for me to realize oh, ok, ok, now I can remember a little bit better, you know what I’m saying? It was the hand behind the neck and pushing down and a punch not landing. I remember specifically nothing landing. So I was like, ‘What the hell is going on over here. But, it was done very well. I mean, they got the money there so they edited it very well. There’s a reason it probably took them about 10 days to put that out there. They had to edit it really, really well.

Paulie Malignaggi also stated that he is looking to get a real boxing match against McGregor to settle everything once and for all on St. Patrick’s day in 2018. However, the former boxing champion did state that it all depends on how things go for McGregor on August 26 against Mayweather. Malignaggi admitted on The MMA Hour that if McGregor doesn’t look competitive against Mayweather, no one will be interested in seeing him box again, which would throw their potential matchup out the window.

Would you be interested in seeing Conor McGregor and Paulie Malignaggi settle their differences in the boxing ring in a sanctioned match? Let’s take this to the comments!