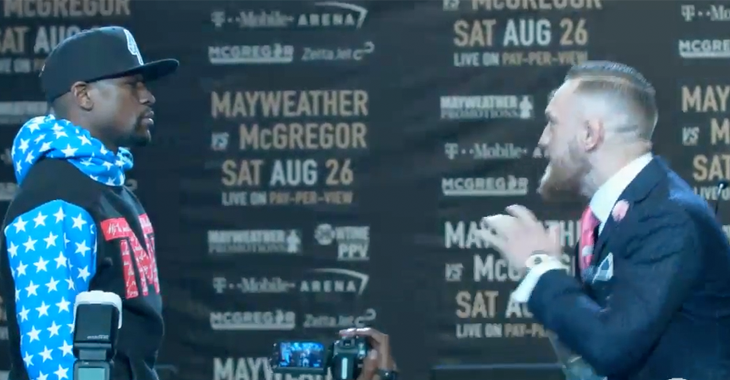 Floyd Mayweather made headlines on Tuesday when he posted a challenge to Conor McGregor on social media offering to fight with 8-ounce gloves instead of the 10-ounce gloves that are in their contracted rules.

“Don’t believe what you hear in the media. Don’t believe what you hear on blog sites. If it’s not coming directly from me, then it’s not true,” Mayweather said in his post. “I’m telling McGregor, “Let’s fight in 8 oz gloves”. McGregor can fight in any brand he prefers or chooses. I’ll be wearing 8 oz Grant gloves. Whatever advantage McGregor needs to feel more comfortable in the ring, I’m willing to accommodate. Let’s give the boxing and MMA fans what they want to see.” McGregor responded on Wednesday on social media saying, “Another handy 12 rounds today. We are prepared to destroy Floyd. Pick whatever size gloves you want as well little man. I fight with 4oz. I don’t give a fuck about the size of the glove. I am coming sprinting at you with bricks. Know that. Brittle hands.”

According to the Nevada State Athletic Commission rules via ESPN, it is mandatory that 10-oz gloves are worn by fighters weighing-in over 135 pounds. The bout between Mayweather and McGregor is set to take place at 154 pounds.

“These regulations are in place for the health and safety of the athletes, which is of the utmost importance to the commission,” Nevada commission executive director Bob Bennett told ESPN on Tuesday. “Our regulations already outline the appropriate glove size according to contracted weight of a fight.” However, Bennett also told MMA fighting that if both McGregor and Mayweather want to use 8-oz gloves for their fight, they would have to give their reasons to the commission on their next meeting set for August 16.

“They would have to come before the commission and articulate why they should be permitted to have their fight using 8-ounce gloves,” Bennett said. “The chairman (Anthony Marnell) and commissioners would make the determination with the health and safety of the fighters being the number-one priority.”

Mayweather’s team reached out to the commission on Tuesday to see what would need to be done to make the change happen.

“They wanted to know what the process and what their options were,” Bennett said.

Do you think Floyd Mayweather and Conor McGregor will end up fighting with the smaller 8-oz gloves? Let’s discuss this in the comment section.